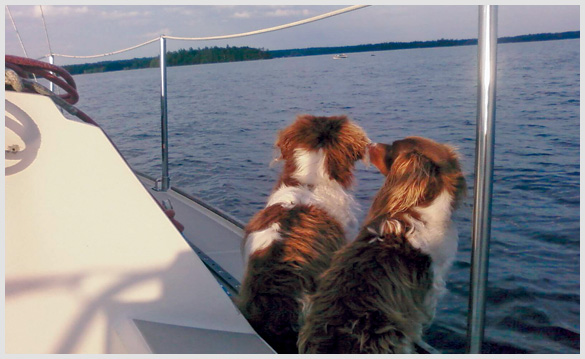 This lucky pair of water dogs is bound for Ireland shortly.
I know what you’re thinking,” Harley, standing at the rail, said to himself. “You’re thinking that I did it once and I won’t be doing it again, but you’re wrong about that.” And sure enough, right after this photo (below) was taken Harley performed a second perfect flying forward one-and-a-half somersault in the pike position. He was at sea, and he was playing with the dolphins. Harley (short for Harlequin), a long-haired dachshund, sails with his mate Dylan (short for Dillingford), out of Florida in the winter and Maine in the summer. Both are water dogs, though their companions, the Mulcahys, didn’t know that when they first thought about adopting them. “We run a sailing school here in Maine and in Florida,” wrote Maura Mulcahy. “Harley and Dylan were put up for adoption, and our first introduction to them was on our O’Day 25 on Sebago Lake. You see, we wanted to be sure they were ‘boat dogs’ before we made the commitment to adopt them. They have worked out like champions. They go absolutely insane when they hear the dolphins. They hear them before we spot them! We have enjoyed thousands of hours sailing with our buddies. We hope to take them to Ireland on our next trip over for our fifteenth anniversary canal boat trip.” 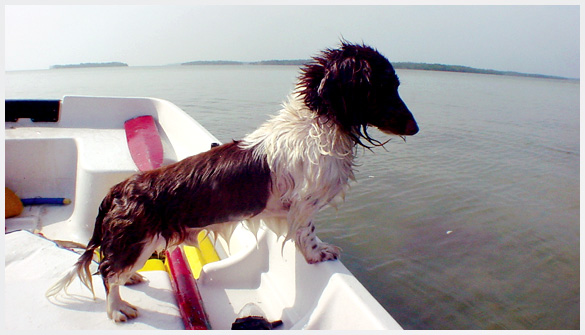 Harley girds himself for a second forward somersault.