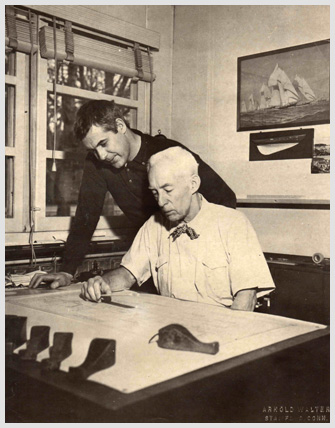 William Atkins and son.
Honoring the Atkins A great big thank you for the lovely article about William Atkin in your May 2009 issue, #104. WoodenBoat magazine is honoring William and his son John at the WoodenBoat Show in June at Mystic Seaport [June 26-28, 2009]. At this time we know about seven very nice Atkin boats that will be there. So, if the weather cooperates we should have a good showing as several are coming a distance!
Pat Atkin, Atkin Boat Plans
Noroton, Connecticut

The Beals Island Designer/Builders Brian Robbins did a great job on a long-overdue story in the May 2009 issue, #104, about the four remaining designer/builders from Beals Island—Earnest Libby, Osmond Beal, Calvin Beal, Jr., and Willis Beal. I own a Calvin Beal design. I called him one day to talk about the design. He said with a chuckle, “Everyone on Beals Island can build boats, including my dentist.” He talked some about how hull shapes have evolved and have been improved one new idea at a time; each generation producing better boats, because they needed to. On Beals Island, they still build from a carved model. They rough it out to the size of a mailbox, shape it, modify it, slice it into pieces (stations), draw it on forms, fair it, and build it full size. No CAD programs here, just a keen eye and skilled predecessors. I wonder if boats are built this way anywhere else in the world. The results of their collective intelligence are workboats that are able, boats that move efficiently, and boats that are built to take a North Atlantic pounding for decades. And, they are graceful to look at. One can pick out a Beals Island boat in San Diego harbor at 300 yards. Is there another saltwater community that has done as much for working boats as have the towns of Beals Island and Jonesport? In the big picture of marine design, form follows function. There is a design that works best to do a certain job, such as lobstering, gillnetting, etc. (function) and there is the art of building boats with hull shapes that do the job best (form). The boatbuilders of Beals Island have evolved as original artists of the Maine workboat.
Bob Knecht
Yarmouth, Maine

A Woman of Many Talents Since readers have gotten to know my mother a bit through my two pieces for MBH&H [Harpswell Notes I, issue #89, and Harpswell Notes II, issue #103], I thought they might be interested to learn that my poetry chapbook Dress Her in Silk will be coming out in early May from Finishing Line Press (finishinglinepress.com). It is a small series of 20 poems that place my mother’s dying of cancer in the context of her unusual childhood in rural South India as the daughter of missionaries.
Martha A. Donovan
Henniker, New Hampshire, and Harpswell, Maine

Talented Young Folk Loved Marti Stone’s piece on Swans Island’s young lobster fishermen. So nice to see young folk hard at work (and I know from personal experience that lobstering is hard work—I had a skiff and a string of traps when I was in high school, oh so many years ago), earning money toward the things they want to do. I found it a nice change from the usual messages we see about our youth being greedy and lazy and “plugged in” 24/7. Kudos to them and to their parents.
Fred Rakey
Wareham, Massachusetts

A Friend Rediscovered I was at a recent boat show here on Cape Cod and saw an issue, MBH&H #101, that had an article about an old friend from my Maine days. I knew Lance Lee from his Bath Apprenticeshop days—a long time ago. It was Lance all right, looking out at me from the pages of the magazine—he hasn’t changed (well, maybe a bit...).
Shirley Powell
Centerville, Massachusetts

More Old Friends Found Eva Murray has long been one of my favorite Maine writers. I was really pleased when she became a regular at MBH&H although I’m sorry she’s not in every issue anymore. And now, my other favorite columnist, Brian Robbins, is represented in your pages. I followed him in Commercial Fisheries News for years and years—I subscribed for that very purpose, in fact—and have laughed with him there and even shed a tear a time or two. I am thrilled.
Virginia (Dinnie) Thorndike Aldridge
Huntington Beach, Calfornia
We are also thrilled to have these writers in our pages. A selection of Eva’s columns, many of which have not appeared in the print magazine, may be seen online, by clicking here along with work by many of our regular magazine columnists and some new voices as well.