Illustration by Caroline Magerl.
As you read this, the boards on the porch have that crisp creak of mid-winter as we check to make sure that the hibernating cottage has not had any unwanted visitors or squatters of the furred, winged, or two-legged varieties. And welcome back, by the way. If this is now your third “View from the Porch,” I count you as a regular reader and bequeath to you a membership in the Porch Regulars Literary Association, with all right and privileges pertaining thereto. [Note: this column by Peter Bass has replaced Peter Spectre's regular column, which was titled "In the Lee of the Boathouse." In turn, Mr. Spectre, who remains as editor of Maine Boats, Homes & Harbors magazine, has a new column of his own, titled "From Whence We Came."] Crumbs to You (Again) It is with great sadness that we belatedly note the second un-coming of the Crown Pilot Cracker, a New England staple often found in, on, or around clam and seafood chowders in New England. I don’t recall ever seeing them served with clear (Rhode Island-style) or tomato based (Manhattan-style) chowders, but then again I am never stupid enough to order those inferior concoctions anyway. Nabisco, which had discontinued Pilot Crackers once before in 1996, was embarrassed into reintroducing them in 1997 by fierce commentary in the New York Times and by Tim Sample, Charles Kuralt, and Chebeague Islanders. I did check Wikipedia on this one, so please take what I say with a grain of salt, something the Crown Pilot did not have and was one of its charms. Nabisco, on explaining its decision to drop the cracker, claimed that shipments of “just” 241,000 pounds in 2007 dropped it out of the barrel. I may be wrong, but there may be a New England bakery out there that would find 241,000 pounds of crackers an economically viable quantity should Nabisco be willing to sell or license the brand. 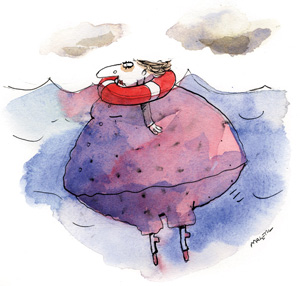 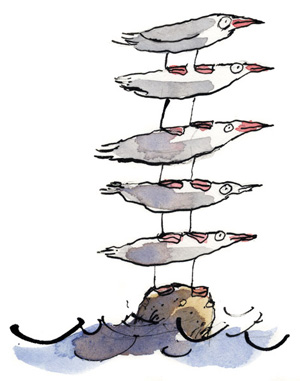 Illustration by Caroline Magerl.
“Fishermen’s Energy is a company founded by a core group of East Coast commercial fishermen to respond to the public’s need to develop the ocean for renewable wind energy. Wind is a clean and constantly renewable energy resource, and it is Fishermen’s Energy’s goal to turn the North Atlantic coastal waters into an unmatched source of clean energy. Fishermen’s Energy and its core group of respected, well-established, commercial fishing industry founders, have researched offshore wind carefully and have chosen to view offshore wind as an opportunity for us and for our fellow citizens, rather than as a threat to our traditional fishing businesses.” In our brave new world of cooperation in lieu of confrontation, this may be one to watch. Congress take note. The Next Great Thing MBH&H gets wonderful press releases on marine products, some of which just must be shared. One of our favorites: Sony Makes Waves at Ibex with New Marine Head Units “Sony today announced its first marine CD receivers that are able to connect directly to compatible iPod®, iPhone™ or other digital music players via a USB connection. “The marine head units (models CDX-H910UI and CDX-M60UI) support new features including MemoryBackup and ZAPPIN™ technology. These features make it easier for boaters to control and find their favorite music on the water. “The company unveiled the marine head units and a Remote Commander® remote control (model RM-X60M) today at the International Boatbuilders’ Exhibition and Conference (IBEX).” To us boaty types, this release conjures up all kinds of great images. Instead of grabbing a magazine on your way to the old WC, grab your iPod instead and rock on. Please remain seated for the performance, however. And for those who find a three-quarter inch thick bulkhead no match for some low frequency sounds, just crank up the volume. Think what you could do with the remote. Another most interesting press release comes from a company called Agraria San Francisco (www.agrariahome.com), which packages scents in the form of tassels to be hung from a doorknob to infuse one’s spaces with the aromas of the world. Their release advocates same to the yachty trade, with scents with such names as Mediterranean Jasmime and Riviera Pear. We would like to add Leaky Diesel and Mediterranean Gigolo, and recommend that they also be packaged with a stick-on patch so the tassels can be used for other purposes once the aroma has dissipated. We also recently learned of the Spanish Albatross Controls System (www.albatrosscontrol.com), which is a serious yacht systems management system. I must confess that upon first reading the release I envisioned the Ancient Mariner amusing himself during the calms by flying his radio-controlled albatross through the rigging. As a student of brand names I question the wisdom of naming anything on a boat Albatross. To be fair, the brand managers at the parent Spanish Company EMMI may not be avid readers of Coleridge. Now is the time of year to keep a close watch on the brown liquor bottles so that the last drops will coincide with the Vernal Equinox. No good Mainer likes to hold over too much brown until the Autumnal. Rum, however, since it comes in light and dark varieties, has a special exception to the aforementioned Capt. Pete’s Rule and may be stocked year round. Here at the hibernating cottage, the porch rockers are still indoors next to the space heater, but the view is good and there is still plenty to talk about. Feet up, binoculars at the ready.

Long-time MBH&H Contributing Editor, freelance writer, and raconteur Peter Bass is an owner of Maine Cottage Furniture. Click here to read other articles by Peter Bass >> Submit your comments... newsy tidbits, photos, illustrations, clippings, rants, and raves for possible use the form below. Or mail to “View From the Porch,” P.O. Box 758, Camden, ME 04843 or fax to 207-236-0811. Items may be edited for length and clarity; materials become the property of Maine Boats, Homes & Harbors, Inc.