a book by Roger F. Duncan 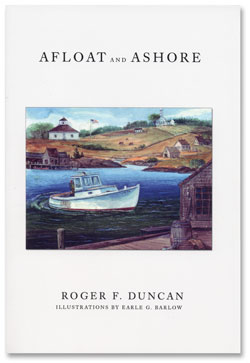 Afloat and Ashore - by Roger F. Duncan,
illustrations by Earle G. Barlow Blackberry Books, 617 East Neck Rd., Nobleboro, ME 04555 ©2005, soft cover, 212 pages, $16.95 Roger Duncan knows the Atlantic coast better than most. An avid sailor, maritime historian, teacher, author, and lifelong New Englander, he turned 90 years old this year. His writing reflects the keen eye, orderly mind, and minimal verbiage of a seasoned mariner who has spent many years observing human behavior. Duncan is probably best known as co-author of A Cruising Guide to the New England Coast. First compiled by his father, Robert Duncan, as a mimeographed aid to navigation for friends and family, the book was expanded and enriched by Roger Duncan and John B. Ware, who co-authored the fifth through tenth editions. Although work on the guide has since been handed off to Duncan’s son and grandson, his writing has appeared in numerous publications, including this one, and his column still appears regularly in the Working Waterfront newspaper. Like the guide and his other books, including Coastal Maine: A Maritime History, the pieces selected for Afloat and Ashore benefit from Roger Duncan’s estimable knowledge of shipbuilding, cultural and natural history, scenic destinations, weather, and tides. They also benefit from his many years of sailing with his wife, Mary, who shares his nautical passion. Afloat and Ashore is neatly organized. The writing is both fluid and concise. There are stories about student athletes, Jonah and the whale, Duncan’s encounters as a part-time party boat skipper, and quarrels between novice yacht owners and those they put in jeopardy. Each story conveys a lesson from history, the classroom, the peculiarities of our climate, or boating. Though Duncan is partial to wooden boats, he nevertheless appreciates all kinds. He also has a more-than-healthy respect for anyone whose livelihood depends on fishing and boating as well as for the sea itself: “The ocean flows,” he writes, “it slides with the tides. Its surface is never still and sometimes violent. The lift and surge of a great wave is irresistible and inexorable. A breaking sea knows no mercy. Thunder squall and fog, snow and vapor, slide between a man and the solid land. A lobsterman must take care of himself, for the sea could not care less.” Much of this book first appeared as columns in Working Waterfront and surely turned countless weekenders into love-struck sailors. Poking in and out of Penobscot Bay’s tall spruce- and rock-lined harbors, on alert for a sudden change in weather, buying lobsters as they are hauled from the trap—Roger and Mary Duncan’s meanderings stir the soul. In “Riding the Buoy Tender,” Duncan describes a Coast Guard cutters’ skipper and 23 enlisted men responsible for maintaining 427 buoys between Canada and Cape Elizabeth, essential work done after the summer people depart. In “Fog” he briefly contemplates the nature of the familiar dampness that he says isn’t any “skim-milk-and-water frog-pond mist. I mean FOG choking thick.” Duncan was an educator for 43 years at a private secondary school for boys in Massachusetts. During that time, he taught English, history, algebra, and Latin, coached crew and JV soccer, and served as headmaster. Eight pieces on “School Days” recall those winters ashore. The section encompassing “Sundays” might be a collection of sermons. Each one bows gently before a divine spirit that guides the days and powers the weather, the gentle breezes under cloudless skies and horizontal, freezing rain of northeasters, teaching many lessons. “We stood on the shore in rain driving at us so hard that we couldn’t face it,” he writes, “our oil clothes plastered to our bodies. We staggered under the gusts, unable to stand against the wind. From the lee of a fish house, we looked out on the harbor. Short, steep waves charged our boat, hollow crested, their tops whipped off and driven ahead of them in clouds of water, half spray and half rain. Each charging sea seemed determined to drive Eastward away to leeward and pile her on the shore in splinters.... I thought of that anchor out to windward, biting deep into the still clay bottom, holding hard against the gale and the charging seas, our salvation against powerful forces which would destroy us, forces which we could not possibly control.” We all need anchors to windward. With grace and intelligence, Roger Duncan has earned a place in the pantheon of Maine’s distinguished writers. —Janet Mendelsohn