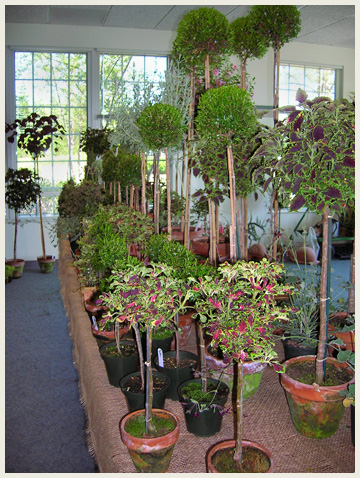 Container plants need a little attention to keep them happy and healthy
until they can go back outside next summer. Photo: Lynette L. Walther
One of the perks of being a garden writer is getting sample plants to grow or gardening products to test. So when the FedEx® driver pulled up to my house with a large box in tow the other day, I wasn’t too surprised. I noted that the return address meant the package wasn’t from relatives or friends. I opened the box, and found that it contained a bag of dirt. “Yippee,” I cried out loud. Actually it was a bag of soil, a special potting mix to be precise. Only a gardener could get so excited about receiving a box of soil — ahem! — or, rather, a box of “professional potting mix.” It was one of the very best surprises I’d had in quite some time — not counting all those Valentine’s Day chocolates. But then I get excited about compost too. My husband has been known to “surprise” me with a trailer-load of compost for my birthday, and last year our daughter brought me a whole trailer load of composted horse manure for Mother’s Day. (I can just sense the jealousy out there from all you other gardeners.) The box of potting soil was a special sample from a manufacturer, sent for me to try. As it turned out, the box of potting mix arrived just in time because this is a good time to re-pot houseplants. 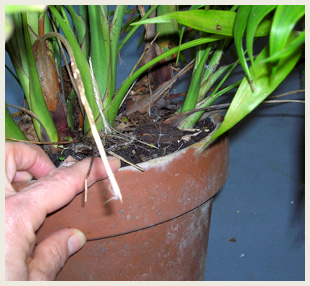 A crusty ring on the inside of the pot
at the soil line indicates a buildup of “salts,” and means
it’s time to re-pot. Photo: Lynette L. Walther
“I’m always amazed that consumers will spend a great deal of time and money choosing and purchasing plants, but then pick up potting mix or soil containers without a second thought,” says Steve Jarahian of Fafard Inc., makers of professional formula soils. “The consumer also needs to consider the price of potting soil, which is just as important as the cost of the actual plants. In other words, don’t just buy the cheapest mix. Ask questions and find a potting mix that produces consistent results time after time.” According to the folks at Fafard, this is a good time to take a close look at those potted plants and tender perennials that came indoors months ago, and replace their growing medium. This will result in healthy plants to take you through the dark days of winter. It’s time to replace the soil if there is: • A crusty ring on the inside of the pot at the soil line • A yellow or white crust on the surface of the potting mix • Crowding of the plant and/or roots growing out of the drainage hole 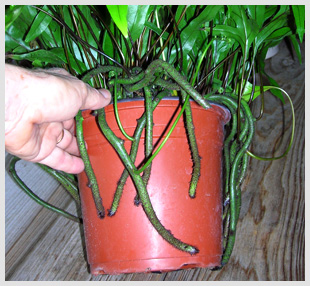 Crowded plants with roots growing outside the pot signal
that it’s time to re-pot. Choose a good-quality potting soil
for the job. Photo: Lynette L. Walther
First clean the empty pots with a stiff brush to scrub off the layer of salts (the crusty ring), or run pots through a dishwasher to clean them thoroughly. A layer on top of the old soil also indicates an accumulation of salt deposits. For a pot-bound plant, move up to a larger pot. Loosen the roots before settling the plant into the new clean pot and fill in with fresh commercial potting mix. To reduce salt buildups in the future, leach or flush out the salts at each watering, or at least on a monthly basis. Wet the entire surface of the potting mix, and water long enough until you see water seeping out of the drainage holes. This is also a good time to start an indoor herb garden. Not all herbs are suitable for indoor growing during the winter months. Basil, lemon verbena, summer savory and tarragon usually go dormant or frequently shed leaves this time of year. Instead try oregano, thyme, parsley, sage, sweet bay (Laurus nobilis), chives, onion sets, garlic chives, peppermint, spearmint, or lemon balm. Place pots in a south-facing window or under ‘grow” lights. Grow in a good-quality houseplant potting mixture that drains well and retains nutrients. Set pots in trays lined with gravel to keep them from getting “wet feet.” Trim herbs as needed and to keep them neat. Also, don’t forget one of the most important members of the household—the cat. Plant a pot of kitty “greens” (oat or wheat grass or catnip) to keep the little fur ball healthy and happy all winter.