Orchids through the winter and beyond

Phalenopsis orchid flower -- A mesmerizing Phalaenopsis bloom shows why orchids have captivated so many growers. Photo: Lynette L. Walther
Once only available to the most discerning growers with the resources to purchase them, orchids (while still exotic) have become readily available and less expensive. Now they are plants that anyone can afford to buy and grow, and they light up a room with their seductive, long-lasting blooms. Orchids do require a special set of skills and understanding to be grown successfully. Think about it: orchids in Maine have been thrust far out of their native habitat and into the frigid north country. 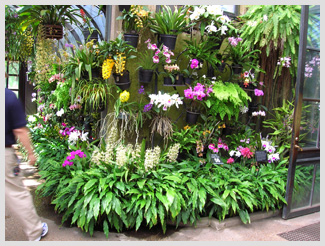 Orchid envy: This spectacular orchid display is part of
the lush and tropical Longwood Gardens observatory
in Pennsylvania. Photo: Lynette L. Walther
The orchid family is huge, one of the largest in the plant kingdom. Orchids grow on nearly every continent. I’ve seen epiphytic orchids growing wild in the Bahamas and Costa Rica, and have discovered brilliant pink, wild terrestrial orchids in the section of Acadia National Park that is on Isle au Haut. And indeed Maine’s favorite wildflower, the ladyslipper, is an orchid. Some orchid varieties like a bit of sun now and then, and others, such as the terrestrial reedstem epidendrum or vanda orchids, want more sun more often. Some, like the Phalaenopsis, don’t want any direct sun. I try to discover the type of environment my orchids would naturally have grown in, and provide that. Although I admit that it isn’t easy to recreate the atmosphere of a tropical rain forest in the dead of a Maine winter. 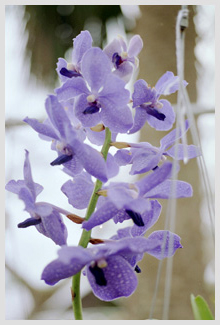 Blue Vanda orchid.
Photo: Lynette L. Walther
Orchids are more affordable these days, but they still require care and attention. My own collection is an example of what can go wrong. Growing orchids has been an experience for me. I’ve had a few casualties, but every failure has been a learning experience as well, and I thought I had the routine pretty well figured out. For months the plants had seemed quite content, but one day trouble reared its ugly head in the form of a tiny bug. It started innocently enough. The leaves of my yellow Cattleya were looking a bit sad and wrinkled. Then I noticed tiny, fuzzy white spots on the undersides of its leaves. I looked closer, then looked too at my little Phalaenopsis orchid. It had been struggling for some time. I was startled to find more white fuzzy spots. After consulting an orchid-growing guide I realized this required immediate attention. My plants had mealybugs, and it was time to shift into gear if I wanted to save them. The dry conditions in a heated home can facilitate an infestation of these tiny parasites. The orchids had probably picked the bugs up as hitchhikers during the summer when the plants were outside. My orchids would need treating and re-potting, post-haste. 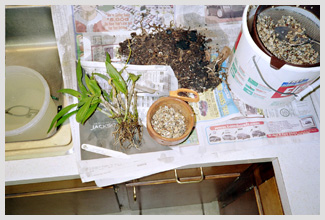 A mealybug infestation calls for prompt action, which includes
plant inspection and repotting. Deteriorated bark medium
is replaced by a rock-like substance that does not
break down and cause root rot. Photo: Lynette L. Walther
When I took it out of its pot, I discovered that the Phalaenopsis had lost most of its roots to root rot. It had been potted in a mix of moss and bark. Being fairly new to orchid growing, I had not realized that even though the plant came potted in that combination, the medium had quickly broken down into something like a compost. Excess moisture held in the mixture was what had caused the plant to fail. The mealybugs weren’t helping the situation. A cotton swab dipped in rubbing alcohol was applied to each and every bit of white fuzz. The rest of my orchids were un-potted, and the roots were examined and treated with the alcohol swab where necessary. Working quickly, but thoroughly, I examined each orchid, treated it, snipped away any dead foliage or roots and rinsed the plants in warm water. Others, a mini Dendrobium and another Cattleya and an Oncidium had also been infested. Trimmed leaf edges were dipped into powdered cinnamon, which helps to stop and discourage disease. My potting medium was pre-soaked in a dilute solution of root stimulating concentrate. That would help the orchids get re-stablished in their new pots. Pots were sterilized in a bleach and water mix, and were rinsed well. I used Dyna-Rok potting medium. It has good moisture absorption properties, but unlike traditional bark mixes, it does not break down. Reference works, such as The Gardeners Guide to Growing Orchids, which includes repotting and an orchid pest and disease troubleshooting guide, and ,The Best Orchids for Indoors, an encyclopedic quick reference to orchid varieties (published by the Brooklyn Botanic Garden All-Region Guides) provided a wonderful roadmap on this botanical journey. Both books list source information and web sites, which came in handy recently when I was trying to find more information on caring for a new addition to my collection, a vanilla orchid. Together, both books combine for a good reference library on selecting, growing, caring for and propagating orchids. Add to those the recent Miniature Orchids, by Steven Frowine (Timber Press), which features 300 “diminutive gems” and how to select and grown them, and you have a good, all-round working orchid library. Here are some orchid basics, discovered through investigation, success and trial and error: 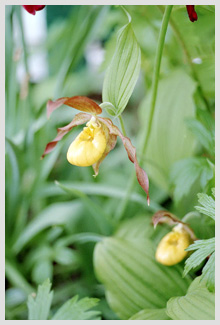 Ladyslipper orchid.
Photo: Lynette L. Walther
• Phalaenopsis is the easiest orchid for the amateur, and is the top choice for the first-time orchid grower. It will tolerate a good deal of neglect. Indeed casualties in this case often come from over watering or too much direct sunshine. Grow this orchid out of direct sunlight, but with bright light. This “most tropical” of orchids does not tolerate cold, and should be brought inside when temperatures go below 60 degrees, otherwise the leaves will start to turn yellow. • Second place goes to the Oncidiums. They are fairly easy to grow, and don’t require the heat that some orchids do. They do prefer humidity and a full-spectrum of light, or sunlight. • Dendrobiums come next on the beginner scale. They like moisture every day when growing, and want to completely dry out each day. Keep Dendrobiums in very small clay pots or attached to slabs of wood or coir fiber to help facilitate the drying out. Slack off on watering while Dendrobiums are not actively growing. New growth on a Dendrobium stalk signals the time to begin watering daily, and fertilizing once a week with an orchid fertilizer. • Use clay pots for all orchids because the clay dries out easily, and gets rid of excess water through the sides of the pot. Plastic pots hold too much water. • For a potting medium, try coconut husk chips or rock-like orchid medium chips. The size of the potting medium particles should be determined by the size of the roots to be potted up, with delicate smaller roots using smaller-sized chunks. Some orchids, such as the Phalaenopsis, benefit from being repotted every year or so to prevent the break-down of the potting medium from holding too much moisture around the roots. In general, many orchids are quite easy to grow and provide stunning, long-lasting blossoms. My Cattleyas are looking great now with new growth, and that spunky little Dendrobium is already blooming — again. That is one blooming orchid. My Oncidium has bloomed since, and is putting on plenty of new growth. Sadly, the Phalaenopsis did not make it, but I did learn a valuable lesson. The Dyna-Gro products are available at the company’s web site: www.dyna-gro.com and the books are available at bookstores or from Brooklyn Botanic Gardens, www.bbg.org. The paperback guides, 120 pages each, have color photographs and illustrations, and are $9.95 each. Miniature Orchids is 264 pages, hardcover at $29.95 from Timber Press.