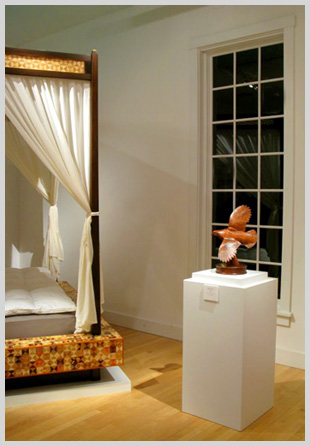 Maine Wood 2008
On display in the Messler Gallery at the
Center for Furniture Craftsmanship
Eight Maine woodworkers have received awards at Maine Wood 2008, a statewide, juried exhibition on display in Rockport’s Messler Gallery through March 14, 2008. Aaron Fedarko, from Camden, took top honors for his Dos Amigos table, winning the “Peoples Choice Award” at the opening on November. His $500 cash prize was sponsored by the Holt & Bugbee lumber company of Tewksbury, Massachusetts. Lynn Szymanski, from York, won the other top prize. Her sculptural piece “Remnants” was selected “Jurors Best in Show.” She received a $500 gift certificate from Lie-Nielsen Toolworks of Warren, Maine. Other winners came from across the state, with work that ranged from a four-poster bed to the mechanical frog for which Alan Bradstreet, from Pownal, won “Most Creative.” Chris Joyce, from Stonington, won “Best New Maker.” Steve Burke, from Hermon, won “Best Joinery Techniques.” Brian Reid, from Rockland, won “Best Use of Veneer.” Peter Thompson, from Cornville, won “Outstanding Craftsmanship,” and Wayne Hall, from Bucksport, won “Best in Furniture.” 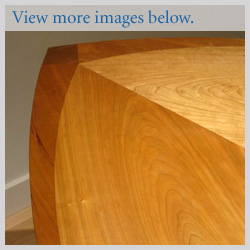 Dos Amigos, People's Choice Award Winner
by Aaron Fedarko
Maine Wood 2008 is co-sponsored by eleven Maine crafts and woodworking organizations and will be on display at the Messler Gallery through March 14, 2008. Gallery hours are 9:00 a.m. to 5:00 p.m. Monday through Friday and 10:00 a.m. to 4:00 p.m. Saturdays. The Messler Gallery is located on the campus of the Center for Furniture Craftsmanship, at 25 Mill Street in Rockport, Maine. The exhibition can also be viewed on the center’s web site. For more information: 207-594-5611; www.woodschool.org