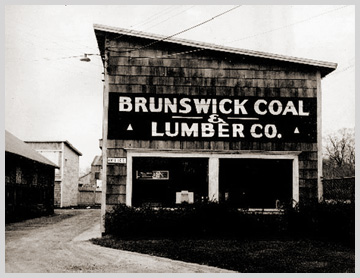 2008 marks the 100th Anniversary for
Downeast Energy & Building Supply, which started as Brunswick Coal.
Brunswick Coal, the company that began it all, began selling coal and firewood to midcoast customers in 1908. In 1931, Allen Morrell bought the company, and expanded the business. He added the "& Lumber" to the name, and included heating oil, propane and building materials in the services the company offered to its customers. Since then, two of his children, Bob and Dick Morrell, and four members of the next generation have joined in. Over the years, Downeast has expanded through growth and acquisition of other small companies. Because the different names of the local heating service companies that were part of the "Good Friends Downeast” family became confusing for the customers, in 1998 Downeast Energy became the single name for all the heating locations and the gasoline division, and Downeast Building Supply became the name for the building materials store. Today, in addition to the building materials yard in Brunswick, there are 12 other heating companies under the Downeast umbrella, stretching throughout Maine and into New Hampshire. The company recently sold the successful Puffin Stop division, which was developed from a wholesale gas distributorship into a chain of full service convenience stores. Even without the Puffin Stop chain, the company employs more than 450 people, some of whom have been on board for two or even three decades.

Roll over numbers to view thumbnails


Join Downeast Energy & Building Supply on June 7th, 2008 for the Lumberyard Olympics and an Old-Fashioned Pie Baking Contest to help celebrate its 100th Anniversary. Click here for more information and other Coastal Maine events for June.