Salmon is smoked on racks at Stonington Sea Products in Stonington, Maine.
The business features smoked salmon and other smoked seafood.
Photo by Fred J. Field
Life in downeast Maine once revolved around Atlantic salmon. Ocean pens where the fish were raised dotted bays and inlets. Locally farmed salmon – the Pine Tree State’s top seafood export after lobster – was trumpeted on menus at inns and restaurants. Widespread aquaculture even spawned an annual salmon festival still held over Labor Day weekend in Eastport. Disease, the threat of farmed fish escaping and mingling with endangered wild salmon in Maine rivers, closer and costlier environmental monitoring and other factors caused Maine’s aquaculture industry to crash within the past decade. The few surviving companies were ordered to leave nearly half of their ocean sites fallow for two years. Hundreds of Mainers were laid off in the shakeup. 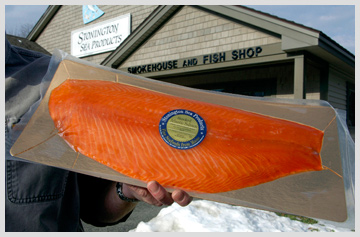