By Greg Rössel
Traveling west from Rockland, the rail passes through Thomaston along the St. George River to south Warren where it dips inland along ponds and marsh to cross Route one at Waldoboro in sight of Moody’s Diner. Then, trending inland some more, it continues along the shores of Damariscotta Lake, south along Salt Bay and into the town of Newcastle. Continuing on, the train passes through the marshes and over the 1,000-foot Sheepscot River Bridge and the old right-of-way of the narrow gauge Wiscasset, Waterville & Farmington RR and into the village of Wiscasset for a stop at the town landing.
Story continues below the image. 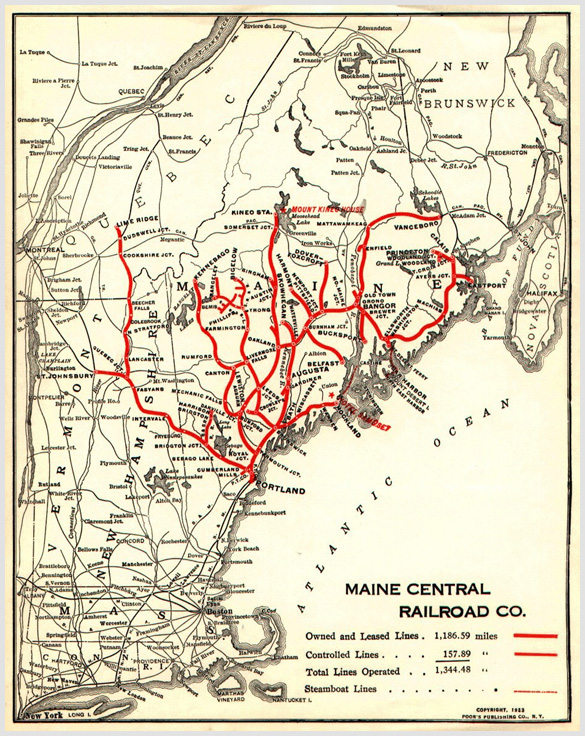 This 1923 map shows the 1,300-plus miles of rail lines then owned by Maine Central Railroad.
Multimodal before that buzz-word had been coined, the company also owned and operated the
Mount Desert Ferry and a steamer line to Castine.
From Wiscasset, the line sweeps south of Route One, crossing beneath it at Montsweag on its way to Woolwich along Pleasant Cove, along the upper end of the Sasanoa and onto the circa 1927 Carlton Bridge over Kennebec River. Some claim this classy-looking crossing with its rusty vertical-lift towers still gives the "Interstate-modern" concrete highway replacement running alongside a run for its money --at least in the aesthetics department. The Carlton also provides a top-notch view of the operation at Bath Iron Works with its massive cranes and big-ticket military vessels produced there. Prior to the construction of the Carlton Bridge, all Rockland-bound rail cars had to be ferried across the Kennebec. At Bath, the train stops at the classic brick station built in 1941. The train wends its way slowly through the backyards and neighborhoods of Bath before crossing the New Meadows River, passing BIW’s industrial Harding’s Plant, then to Cooks Corner and the sprawling (and soon to be closed) Naval Air Station and into the heart of bustling downtown Brunswick with its elegant buildings, Bowdoin College, museums, and tree-lined park. Click here to return to the story, To Rockland by Rail and Beyond.