Houses and Barns by John Libby raising a new timber frame
to replace a building that burned at Great Island Boat Yard.
Image by Leila Murphy

Their Boston hosts had warned Steve and Stephanie Rowe that tail-gating for the Patriots game would begin at 8:00 a.m. (proof that “fan” is, indeed, short for fanatic). So the couple was sleeping soundly in the guest room, in anticipation of an early start on the trip to the game, when their cell phone jangled at 2:20 a.m. It was Jeff Goodenow, the longest-serving employee of the Rowe's business, Great Island Boat Yard, calling from Maine to say that the yard was on fire. Service manager Bob Sharp was the second call. He confirmed that the building that housed the offices, chandlery, brokerage, and mechanical shop was burning to the ground. 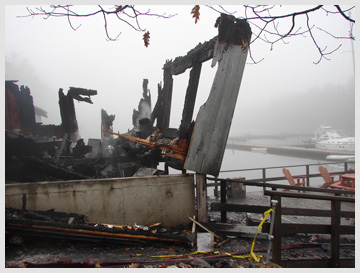 Sharp clearly remembered the somewhat eerie exchange: “You’re kidding” was Steve’s first, groggy response. Given the bad news again, he could only repeat “You’re kidding.” At first, Steve wasn’t ready to go back to the yard. “I was wasn’t sure which facility was involved, only that the boatyard was on fire. It was Stephanie who said ‘We have to go.’” The mental fog began to lift as the couple headed north to Harpswell. There were none of the moans and expletives-deleted you might expect. “We were strangely calm,” Steve recalled.

Both Rowes had been schooled as mechanical engineers at Union College in Schenectady, New York. Each spent 14 years helping General Electric build power plants on four continents before they married. They decided four years ago to buy the boatyard. The previous owners had begun to move the business from a hauling, launching, and storage yard to one that offered a wider range of services. The Rowes accelerated that shift, and now provide full service, including refinishing, mechanical, rigging, electrical, and navigation systems. Great Island is equipped to completely overhaul large boats, such as the stem-to-stern refurbishing of a 52-foot Little Harbor sloop that was under way as this went to press.

The Rowe’s calm reaction seems very strange indeed when you consider what they had been going through before the fire, as they worked to put their seven-year expansion plan ahead of schedule. For Steve it had been months of 12-hour days overseeing 17 different subcontractors for new storage and work sheds, and paving, sewer, dockage, and electrical service work. Stephanie had divided her long hours between caring for the couple’s two young sons and the design, installation, and operation of the company’s computer systems.

A 12,000-square-foot boat storage shed and rigging shop had been completed just before a malfunctioning surge-protector set the yard’s work center afire. Driving toward the smoking rubble, the couple began to make lists, often a habit with people who like to “get on with it.” Twenty-two employees would be showing up for work on Monday. So the first list was for a time clock, supplies, furniture, computers, microwaves, and refrigerators -- all that was needed to keep the work -- and the work breaks -- going. The couple spent Sunday and Monday buying and scrounging their way down the list, and quasi-normal work routines -- winter is the busiest time of year -- resumed on Monday. By Thursday phone, Internet and computer systems had been restored.

The couple’s even-keeled approach to steadily improving the yard -- and its service to boaters -- had not been lost on those hired to help advance the Rowe’s plans. A number of those were part of the six volunteer fire companies that sped to fight the middle-of-the-night blaze but were unable to save the half-century-old building. Others soon found themselves helping the Rowes meet their goal of having a new center ready to serve customers by early June. In a sense, those pre-dawn calls woke up scores of workmen, public officials, bankers, builders -- and well-wishers. Almost immediately those “second responders” found themselves involved in a fast-tracked replacement of the yard’s charred nerve center. 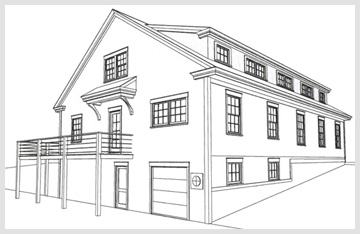 Those who don’t know the Rowes or the kind of craftsmen they hire might consider a June deadline to be a pretty nutty idea. Especially since it meant working through a rough winter on meticulously drawn plans for a larger, more energy-efficient building. But this is all taking place in Maine, where prompt, resourceful response to emergencies is pretty much a given. It didn’t hurt that the economic downturn provided lower prices for materials and better terms at the bank. Then, too, the Rowes had learned to rely on people who do good work.

The neighboring Wallace family had built the yard’s new docks last year and so were the logical choice to install bulkheads for the new shoreside building. Houses and Barns by John Libby had built Bob Sharp’s post-and-beam home on nearby Dingley Island and a building at the Rowes’ home across Orrs Cove from the yard. So Libby was the right man to design and build the kind of space the owners knew they needed.

The new headquarters -- a term the Rowes consider “too corporate” -- will have the traditional, turn-of -the-century look of its predecessor and an unfinished second floor for future explansion. Most importantly, it will have the large, open main floor best provided by post-and-beam construction. That will duplicate one advantage of the burned-down building, an open floor plan, that the Rowes had grown accustomed to. Until the fire, that was where you’d find the yard’s owners, the employees, the customers seeking a quart of Cetol or a handful of machine screws, the boat owners negotiating a repair, and the would-be buyers and sellers of power or sailboats who were waiting to talk to Stew Hart, who runs the brokerage. All this in one shared space. Customers who happened to drop in to a “waiting room” chair during the crew’s break might find themselves exchanging yarns, advice, chop-busting, and passionate excuses for the Red Sox. 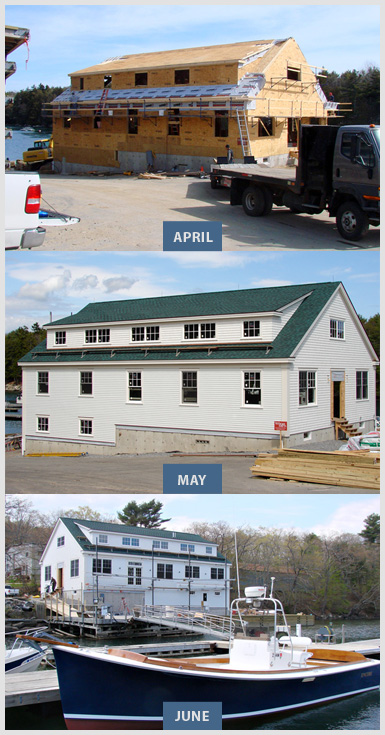 Working in the middle of the comings and goings, the Rowes found they could more easily take the daily pulse of customers and work crew alike, and of their interactions. Those are essential readings you can’t get from a bunch of offices where doors tend to get closed. Before the debris was cleared, before the insurance claims were settled, before the bank loan was signed, they knew they had to get back to their “one big room” management style.

The Wallaces worked in frigid mud and water to install the bulkheads that would keep the new 40-by-60-foot building from sliding into Orrs Cove. GWM Concrete poured a special water-resistant mix into the foundation just three days after permits were signed by town officials on January 15.The post-and-beam frames were cut off-site, then transported to Harpswell, fitted, and raised on March 9.

Energy efficiency is being built into the building under strict “go-no go” criteria. Insulating the foundation cuts heating bills in half. So that was a “go.” But it would take 25 years to save enough on those bills to pay off a $5,000 investment in R-38 insulation on roof panels. No go. Switching to windows made by Matthews Brothers of Belfast, however, will cut energy costs by 22 percent over 10 years. Another go. Similarly, radiant floor heat fired by a cutting-edge Buderus boiler will be installed to take advantage of the ability to purchase propane in bulk.

This is the approach you’d expect from experienced project engineers. From the beginning it’s been “make a plan, draw up a budget, and move forward.” “We don’t dwell on mistakes,” said Stephanie, “but keep looking ahead, advancing the plan.” The progress at Great Island has been steady -- and noticeable. By design there are slightly fewer customers but their boats are somewhat larger, requiring a wider range of services. Revenues are up 16 per cent over last year and 130 percent since 2005. Not bad for a recession.

It’s tempting to attribute the Rowe’s success to their corporate and engineering experience -- but neither of them is inclined to do so. Steve credits the fact that he grew up in a family that met the daily demands of running a small business -- a ski resort near Saratoga Springs, New York. Stephanie thinks their forward motion may simply be a function of personalities. “I love projects and challenges,” she said. Steve nodded his agreement. And the bottom line is far from being their only motivation. As Steve said, “we both love the idea of putting beautiful boats in the water.” Timeline Gallery:

A Boatyard With Roots 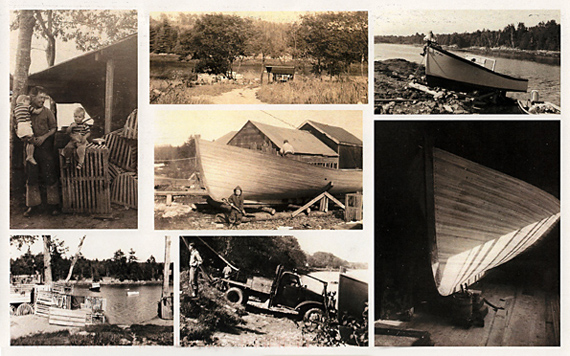 Great Island Boat Yard, 1946-1959
Photos taken by the Wallace Family and courtesy of Great Island Boat Yard.
It was a slick deal when Lindell Wallace bought the land at the head of Orrs Cove, the site of boat yards for the past 60 years. Literally. From the entrance to his business, Wallace Marina and Boat Yard off Route 24, it was sharply downhill to the docks. If the clay-laced soil was wet from rain, dew, or fog, it could be very slippery going - by car, truck or Shank’s mare. For 15 years, when the weather was wet, you could park at the entrance and side-step down to the yard offices or your boat. Real men and women, of course, tried various clutch and first-gear combinations to get down the hill. Luck held for Lindell’s customers, a mix of local skiff owners and more affluent lumber executives with Grady Whites, until a moist late-spring day in 1972, That was when Bill Crooker turned into the yard with his Chevy pickup in first gear. He felt the tail swing out, got no response from the brakes, and waited helplessly for the long slide to be stopped by a boat at the bottom of the hill. It was. That’s when Wallace finally decided to blacktop the driveway. Newer customers of what is now Great Island Boat Yard will never know the excitement that might have been theirs. The delay in paving the hill may have owed something to the fact, asserted by Lindell’s sons Jimmy and Ben, that their father was not primarily a businessman. Mostly, he loved fishing - preferably for sardines - and building boats. The marina was simply a way to supplement income to support a growing family, a common need for coastal fishermen. “It was mostly hauling, launching, and storing small boats,” son Ben recalled. During 30 years as owner of the yard, Lindell built 50 fishing skiffs 20-plus feet in length. It was a family enterprise with plenty to keep him and his two brothers and two sisters busy. “There weren’t any plans. He just used his judgment and instinct,” said son Jimmy. Lindell Wallace was but one of several successful builders of wooden boats along the eastern shores of Casco Bay. His boats, most built for local fishermen, sold for $125 a foot. Most competitors were building flat-bottomed boats; Lindell built V-bottomed designs that took a chop better. Jimmy notes that they were “pretty boats with a sheer and personality.” The Wallaces and their employees increasingly handled servicing of outboards and routine boat maintenance. Inevitably, the learning curve was flattened a time or two. One day, Ben remembered, the crew lost track of the tides and launched a J-30 in two feet of water. “Trouble was, a J-30 draws four feet and the owner was standing there watching.” When the yard was sold in 1985, it had 225 customers, some of whom still keep their boats at the head of Orrs Cove. “We kept the New England flavor,” Ben stated with pride. He also endorsed the Wallace’s boat yard as “a helluva place to raise a family.” Now under a fourth owner, it still is.
--PS