Childhood memories and a love of rowboats 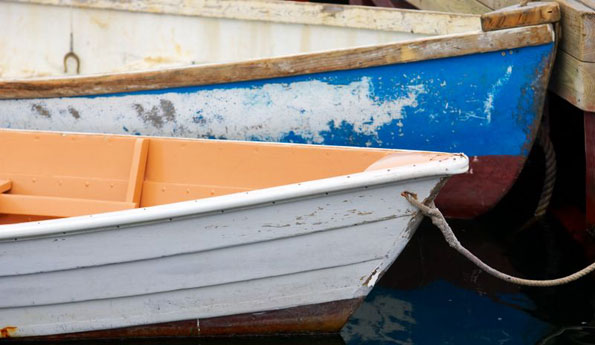 When I was a boy, growing up in Massachusetts on Cape Cod, I lived for a couple of years in Truro, way down the Cape next to Provincetown. It was a tiny town then, no more than a couple hundred people year round, perhaps 500 or so in the summer, and a general store and a post office and a boatyard down at the mouth of the Pamet River where it emptied into Cape Cod Bay. There wasn't much for a boy to do. To break the boredom I used to hitchhike into Provincetown and hang around the fish pier, or hunt for Indian arrowheads on Corn Hill, or help a friend who lived on a farm shoot rats in the chicken barn, or, when really desperate, lay pennies on the railroad tracks and wait for the single freight of the week to pass by and flatten them out. But my favorite pastime was to go down to the Pamet and poke around the boatyard.

One day when skylarking through the yard and coincidentally suffering from a near-terminal case of I-gotta-have-a-boat, I saw a rowing punt by the door of a shed, carrying a for-sale sign. It was an unremarkable boat: a couple of side planks, a cross-planked bottom, flat transoms at both ends, and lots of peeling paint, but it reminded me of the punt that Walt Kelley's cartoon character Pogo used to row around the Swamp with his friends. Pogo's punt would start out in the first frame of a comic strip with a simple name like Frenchie with no hailing port, and in the next frame it would become something like Shikuma, and then Henry Shikuma from Hilo, and then Henry and Ellen from Oahu, and then Missie B from Dubuque, and later the S.S. Helen Barrow from Spokane, and so on. Only primordial boat junkies paid any attention to this running gag. Straight folk were too busy trying to figure out whether Pogo was a Republican or a Democrat or a socialist verging on a pinko Commie fellow traveler. One of the carpenters at the Pamet River boatyard told me that the asking price for the punt was $35, which doesn't sound like much now and probably wasn't much then, but it might as well have been a thousand dollars as far as I was concerned. My family wasn't living on easy street in those days; I wasn't old enough to have a paying job. Broke or not, I was at once a rowboat nut and a Pogo fan, and I had to have that boat. So I decided to build a copy of it, even though I had never built a boat before, or anything else more complicated than a tree house lashed together from planks and an old door or two. I ran back home and got a ruler and ran back to the boatyard and took off a few rough dimensions, and then when nobody was looking liberated some boards from a deconstructed barn down the road. I built that punt in a day, caulking the seams with strips of cloth cut from an old flannel shirt, painted it the next day, and launched it the third. It wasn't fancy and it was the butt of a lot of jokes, but it was good enough for mucking around in the salt marshes and for fishing in a nearby freshwater pond, and it was stable and it didn't leak and it didn't cost $35 and it was mine. I was then, and am to this day, a certifiable rowboat junkie, and that little punt, my first rowing craft, couldn't have come at a better time. At least my old man probably thought so. A couple of weeks earlier, I had been collared for stealing someone else's rowboat. I protested that I had merely borrowed it, that I was simply testing it out to see how she rowed, but the town constable who ran me in for Grand Theft, Watercraft failed to appreciate the distinction. 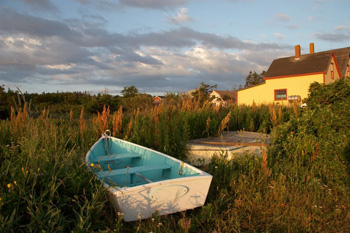 photo by Jamie Bloomquist
(Rowboat - page 2) I had been mucking around the waterfront, checking out the important things, when I came across a skiff pulled up on the shore with a pair of oars and locks in place. How thoughtful, I thought, for someone to leave this beautiful little craft for me to try out. The intention was to whip around the harbor before the owner came back, but one thing led to another and then another and another. About five hours later I was pinched by the law way up where the main road crossed a tidal river I had been exploring for blue crabs, (The owner of the rowboat had thoughtfully included, with the oars and the locks, a long-handled net and a pail.) The constable ran me up to his office in the town hall, sat me on a stool, and discussed crime and its punishment for awhile. I remember he talked a lot about reform school and jail and losing all hope of ever getting a good job and other dire consequences ("Do you know what happens to 12-year-old boys in jail?"). Then he said maybe he should take me home to talk to my old man. I told him thanks but no thanks; I'd rather go to jail. That, as it turned out, was a big mistake. The constable smiled the way the Grinch did when he told the little Who child that he was just cleaning up around the place, that he definitely wasn't stealing Christmas, and said, "Get in the car." It was mid-afternoon, and my old man was taking a nap. The constable stayed in the car, the one with the blue bubble light on top and the billy club under the front seat, and sent me in after him. "What is it?" the old man said when I tapped on the bedroom door. "There's someone outside who wants to talk to you," I said. "Who is he?" he said. "I don't know," I said. "What does he want?" he said. "I don't know," I said. Right, and Grant's Tomb is an ice cream parlor. It was damned uncomfortable standing out there in the yard while the town constable told my old man that his son was a common boat thief. So, too, was listening to the harangue that followed. What happened? Let's just say that I didn't go to jail and didn't spend much time during the rest of that summer beyond the imaginary line that ran between the stakes defining the corners of my old man's investment in the American dream. I got to go to the dentist's office to have my teeth reamed out and that was about it. Definitely not anywhere near the waterfront. It was the second time that year I had been caught with a rowboat that didn't belong to me. I have lost track of the number of times I "borrowed" a rowboat and didn't get caught. Let's say it was more than 50, less than 100.... For years I've carried around a piece of paper with several lines from the novel Flying Colours by C. S. Forester. The passage has to do with the escape of Captain Horatio Hornblower, Royal Navy, from the interior of France in the early nineteenth century. Hornblower and his two companions didn't elude their pursuers by taking off on horseback or by trekking across the countryside like a band of lubbers. They stole a rowboat and pulled down the Loire River to the sea: "The coach was poised perilously on the brink of the river; Hornblower could see the black water sliding along almost under his nose. Two yards away a small rowing boat, moored to a post, swayed about under the influence of wind and stream.... On a night like this it was easy to lose one's way altogether -- except in a boat on the river; in a boat one had only to keep shoving off from shore to allow the current to carry one away faster than any horse could travel in these conditions .... "'We're going to escape down the river in that boat, Brown,' he said." We're going to escape in a rowboat .... It was simple, it was elegant, and it could be done by anyone -- a captain in His Majesty's Royal Navy who wanted to escape his enemies or a boy who was curious about what lay beyond the next headland or a man who needed a little time now and again to himself. Yes, it was all about escape. And about romance, too.