A special exhibit at the 2010 Maine Boats, Homes & Harbors Show, titled "The Evolution of the Maine Lobsterboat," demonstrated how our working heritage has shaped the pleasure craft of today by tracing the signature fishing hull form from its inception to the latest modern iterations. The Maine lobsterboat hull has evolved greatly over time, so this collection began with Maine’s earliest workboats and moved through more evolved inshore craft—the peapod, the Hampton, and the Friendship sloop—to today’s high-powered fishing machines and lobsteryachts.

This illustration by Doug Alvord tells the story of the Maine's iconic fishing boats, and inspired our exploration
of the ways the lobsterboat hull evolved over time. Image courtesy Doug Alvord. Click to enlarge.

The exhibit was inspired in large part by Doug Alvord's poster (above), which has been hanging on the MBH&H office walls as long as anyone can remember. From it, we developed special placards that expounded on each hull type, and identified the boats on display at the show that fit into this continuum. There were peapods, dories, a Friendship sloop, a Pulsifer Hampton, some honest-to-Pete fishing boats, and, of course, a bevy of gorgeous new lobsteryachts. Various exhibitors also provided more information about how their boats fit into this slice of Maine coast history. Below is a slide show of black and white images of various iterations of the Maine lobsterboat. There are historic photographs taken at work and at rest, in good weather and bad. After viewing them, scroll down to view the text and photos from the actual show displays. 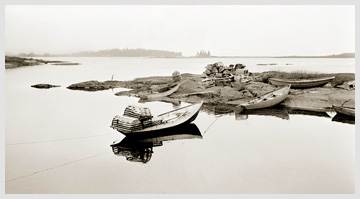 THE DORY—
A “YANKEE INVENTION” The dory–which was built in both slab- and round-sided styles–was used in almost all fisheries and for all sorts of waterfront occupations. Powered by oar and sail, this flat-bottomed lapstrake-sided boat made America work. The Banks dory, a straight-sided boat with removable seats that could be stacked for transport aboard the schooners that fished the Grand Banks, was made famous in paintings by Winslow Homer and others, and was one of the true workhorses of early American coastal life. First mentioned in the American press in the Boston Gazette of 1726, the type goes back much earlier. Yet the dory in all its many variations–the Banks type is but one, the round-sided Swampscott dory being another–was a uniquely American product. The earliest known moving film footage from Maine, shot in 1901, shows a Maine fisherman hauling square-sided wooden traps aboard a dory. The footage can be viewed here at the show in the Northeast Historic Film display in the Rockland Yacht Club building. 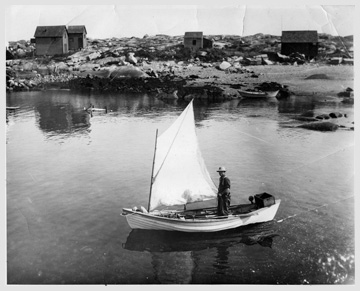 THE PEAPOD—
AN INSHORE FAVORITE Annual reports from the United States Commission of Fish and Fisheries from the late 19th century indicate that the peapod was developed on the island of North Haven about 1870. Other Maine islands, however, have been instrumental in its evolution. To understand the name, imagine the pod of a pea, with one seam split along its length, the individual peas removed, the sides spread and held open by thwarts, and you have a peapod, the boat. Originally these boats were simply called double-enders; the name “peapod” probably came along with the development of the tourist trade. Being double-ended allowed these boats to be easily rowed in both directions. In fact, peapods were commonly rowed from a forward-facing standing position. Peapods were primarily used for inshore lobster fishing. Their shallow draft and maneuverability allowed them to work closely around the Maine coast’s notorious ledges, where a larger, deeper boat could not go. Built in various sizes, with fifteen feet being a common length, their great seaworthiness made peapods a favorite with lighthouse keepers. Some models were propelled primarily by oar; others were designed for both oar and sail. Today, the peapod is still in favor, having found new life as a family pleasure boat, with its beautiful lines, ease of handling, and good performance. 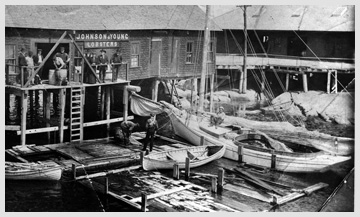 THE FRIENDSHIP SLOOP— LOBSTERING UNDER SAIL The Friendship sloop was the most popular small workboat on the Maine coast in the years before the lobster fishery was revolutionized by the gasoline engine. Built quickly and inexpensively in boatshops up and down the coast, it was a fixture in most Maine harbors. Fishermen used the Friendship to set and haul lobster traps; the type was also used to transport cargo and lobster. Their gaff rig made them easy to maneuver; in fact, when used for lobstering, they were often worked by just one man. Early ancestors of the “sloop boats,” as the early Friendships were called, date back to the 1850s. The type came to be known as the Friendship sloop in the late 19th century, since one of the principal early builders, Wilbur Morse, had a boatshop in the town of Friendship. Morse specialized in the craft from the 1880s onward; he retired in 1927. Today, the Friendship’s beauty, history, and sailing qualities continue to attract new generations of admirers. The Friendship Sloop Society recently held its 50th Anniversary Regatta here in Rockland, attended by an excellent fleet crewed by enthusiasts young and old. KnoxEngineLG.jpg 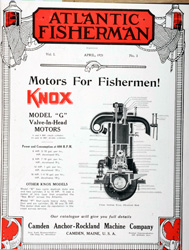 1910 “MAKE AND BREAK”—
THE LITTLE ENGINE THAT DID One- and two-cylinder engines with “make-and-break” ignition systems were introduced around the turn of the 20th century and were quickly adopted by commercial lobstermen along the Maine coast. They represented the beginning of the transition from fishing for lobster under oars and sail to an engine-powered fleet. Such engines greatly expanded both the fishing range and the season; later, with the development of the engine-powered trap hauler, more traps could be fished more quickly. The early engines were easily fitted into the boats of the day, but the search for better performance quickly led to changes in engine design. As the engines evolved in sophistication and horsepower, lobsterboat designs changed as well, a dance that continues to this day. To appreciate this, compare this engine to the massive diesel employed by a modern working boat, such as Man O War (on display here at the show on the docks). The Camden Anchor-Rockland Machine Company, which manufactured this Knox Marine Engine, was established in 1866. By 1916 it was offering engines that ranged from three to forty horsepower, as well as stock boats for the fishing industries, for pleasure boating, and for the U.S. Coast Guard. 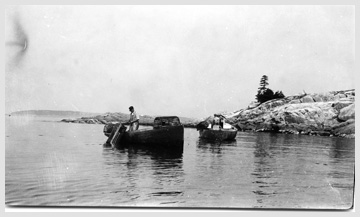 THE HAMPTON BOAT—
SMALL, ABLE, SEAWORTHY The Hampton, a distinctive sailing and rowing workboat with roots in Hampton, New Hampshire, has a long history on the coast of Maine. Originally a two-masted double-ender, with the popularity of the gasoline engine it evolved into a square-sterned motorboat. Percy Sinnet of Bailey Island was the first to strip plank a Hampton, and also the first to put in an engines (circa 1903), making the Hampton type one of the first Maine coast workboats to be converted to engine power. Boatbuilder Charlie Gomes of Harpswell, active from the early years of the 20th century through the 1950s, is credited with the development of the Casco Bay Hampton. This small and able workboat had a tight turning radius, just right for inshore lobstering; it is noted for its seakeeping ability, a must for the waters of Casco Bay and larger waters along the Maine coast. The Casco Bay Hampton lives on today in the strip-planked Pulsifer Hampton, built by Dick Pulsifer of Brunswick to the same scantlings and design as Gomes’s later boats. No longer powered by the early “make-and-break” one-lunger–an example of which is also on display here at the show–the Pulsifer Hampton uses the more efficient modern diesel. 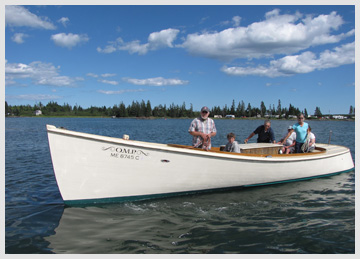 O.M.P. TORPEDO STERN— SLIM, SWIFT AND
A BIT MYSTERIOUS So just what WAS the origin of the “torpedo stern” so popular on the Jonesport style lobsterboats of the early 1900s? Evidently it depends upon whom you ask. Some say it came from Moosabec Reach, where a builder named Eddie Kelley was towing a four-foot-long wooden model of a boat with rounded overhanging schooner-style stern behind his peapod, only to have it capsize. He found that the model towed better upside down—and the torpedo stern was born. Others feel that the style was originated by famed Jonesport builder Will Frost, as embodied by his racy Red Wing of 1924. Still others will tell you that the style was based on the naval torpedo boats of the late 19th century. These were copied by early gasoline racing boats and well-publicized in magazines such as Motor Boat, which was read by Maine boatbuilders of the day. No matter their actual genesis, the torpedo-stern boats were fast. One story tells of a rumrunner from New York who bought up as many Maine-built torpedo-sterned lobsterboats as he could afford for use in his illicit trade. The boats were long and extra narrow to maximize the speed gained from the automobile engines that became widely adopted by boatbuilders after the first world war. O.M.P., our torpedo-sterned example on display, is a Willis Beal-built replica powered by a classic Chevy V-8 engine.

BRIMSTONE—
LIGHT, FAST, BEAUTIFUL This boat, built on Beals Island in 1970 by Harold Gower, is typical of boats from an earlier era when the norm was a smaller and narrower fishing vessel that could be driven easily with less power than the boats of today. Some say Brimstone and others like it are the most beautiful of all lobsterboats; others suggest we should look back to these models, given the need for better fuel efficiency in the future. The Beals Island boats, of which Brimstone is a classic example, are of a lineage begun by Nova Scotian Will “Pappy” Frost, Harold Gower’s uncle. Such craft are skeg-built–that is, the bottom planking at the after part of the hull meets the skeg/keel at almost a right angle. This differs from “built-down” construction, a method prevalent to the westward, wherein the planking flows down into the keel in much the way the hull of a deep-keeled sailboat is planked. Brimstone, like other boats from Beals Island and across Moosabec Reach in Jonesport, was planked with Maine cedar over oak timbers. The result is a tough boat notable for being light, maneuverable, fast, and beautiful. 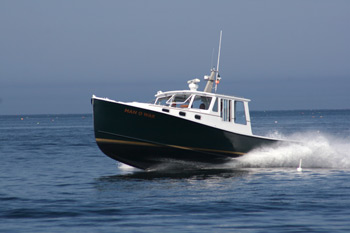 MAN O WAR—BIG, BEAMY, AND “WICKED FAST” Based on the renowned Holland 38 hull, Man O War straddles the line between the working commercial fishing boat and the newer trend in classic Maine lobsteryachts for the pleasure-boating crowd. Its skeg-built hull grew out of the older-style Beals Island boats, but Man O War is both larger and beamier with larger flat area aft. The advent of lighter, higher-horsepower marine diesel engines has allowed lobstermen to run these larger boats, which can carry more traps, and get out to remote fishing grounds more quickly. It has also allowed fishermen and pleasure users alike to run at serious speeds—40-plus mph not being out of the realm. Depending on finish details, the versatile Holland 38 and its brethren can be put into service as bare bones fishing machines or teak-trimmed lobsteryachts with all the amenities. Whichever way the hull is fitted out, the 1,350-hp MAN diesel ensures that the emphasis remains on “fast.”