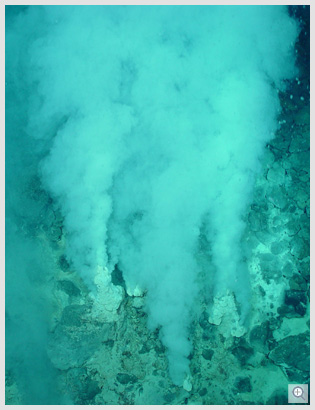 One of the ways salt enters the ocean
is through hydrothermal vents deep in the ocean floor.
I think it’s time we moved away from small and practical issues and pondered one of the really big questions: why is the sea salty? When I was a child my mother advised me to bathe every scratch, every skinned knee, every boil and blister and blemish in ocean water. I remember that the water stung my various wounds, yet I have few physical scars left from the scrapes of childhood. My grandmother told me to gargle with salt water if I had a toothache or a sore throat. Not necessarily ocean water—straight Morton’s in a glass of warm water would do. The salted water soothed my throat and drew the ache from a tooth (temporarily). There’s undoubtedly a scientific reason why salt water is so beneficial to human beings. I don’t know that reason. I do know that I, like many, are drawn inexorably to ocean water. The saltiness of ocean water is called its salinity. Salinity means the total salt content in water. So, a salinity of 35 parts per thousand means there are 35 pounds of salt per 1,000 pounds of seawater. But there’s no single type of salt flavoring seawater. Ocean water contains a whirlwind of elements that are classified as salts. Chloride, sodium, magnesium, sulfate, calcium, potassium, and 71 other chemicals make up 99 percent of the dissolved solids in sea water. Where does the salt come from? Some of it is eroded from rocks by rain. Rainwater percolates through the soil bearing its cargo of dissolved minerals, meets up with a stream, then a river, and eventually enters the ocean. Salt also enters the ocean from hydrothermal vents deep in the ocean floor. The hydrothermal vents are siphons of gas and hot water along the mid-Atlantic Ridge and other oceanic mountain ranges. The extremely hot water dissolves minerals as it passes through rocks in the earth’s crust and brings those minerals out into the open ocean. Sometimes the minerals react to the cold water and precipitate out, forming cones and other odd shapes around the vents. Most of the time the minerals stay dissolved in the seawater. Volcanoes also add salt to the ocean in much the same way. The hot water and gasses emitted by an erupting underwater volcano add salt and minerals to the ocean in a manner similar to a hydrothermal vent, but in a much more abrupt manner. Why does the ocean stay salty? With all the worlds’ rivers forever feeding zillions of cubic meters of fresh water into the oceans, not to mention the rain that falls on them daily, you would think the saltiness of the ocean would become diluted, but it doesn’t. The answer lies with the sun. The heat of the sun warms the top layer of the ocean. As a result, evaporation takes place. If you’ve ever tasted the white ring on the rocks around a tide pool on a hot summer day, you know that when water evaporates, it leaves its salts behind. So, while the top layer of the ocean may evaporate, the salt stays put. Then the question becomes, why isn’t the ocean too salty? The answer is because the ocean is in a type of stasis. In very deep water, which is under phenomenal pressure, dissolved salts precipitate out of seawater to form rocks on the ocean floor. Globally this process just about matches the amount of salt that is introduced to the ocean by rivers, volcanoes, and hydrothermal vents. Of course, parts of the world’s oceans vary in their salinity. The saltiest water, around 40 parts per thousand, occurs in the Red Sea and the Persian Gulf, where rates of evaporation are very high. Our region, the North Atlantic, is the saltiest of the large oceans, with a salinity of about 37.9 parts per thousand. Within the North Atlantic, the saltiest part is the Sargasso Sea, an area of about 2 million square miles, located about 2,000 miles west of the Canary Islands. Regardless of its salinity or the types of minerals that lie within it, I still take salt water for a toothache and throw my body into the ocean whenever I can. Quite literally, the ocean is forever in my blood.