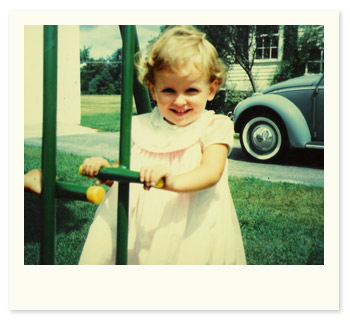 Portrait of the author as a young scientist.
I don’t think I was born particularly curious. From what my mother recounts, I was a fat and happy baby, prone to laughing at sunlight and taking nice long naps. I think my curiosity evolved, oddly enough, after I left school for good. Then, unencumbered by tests and laboratory exams, I became free to explore my late-blooming interest in the natural world, to ask “why?” and “how come?” often and loudly, and to poke into any and all intellectual fields with a dilettante’s delight. Which may be why I like scientists so much. Rather than the stereotypical nerd in a white lab coat and thick glasses, the scientists I have gotten to know in my life tend to be quirky, interesting folks who have taken their own curiosity about the world and put it to good use. At the University of Maine Darling Center in Walpole, for instance, you find scientists working on intriguing topics like the interaction between plankton and sunlight in the ocean. At the Bigelow Laboratory in West Boothbay, scientists are prying into the chemical and biological properties of the Arctic and Antarctic oceans. Other Maine scientists are studying the causes of toxic plankton blooms in the Gulf of Maine, where herring spawn, and how fish manufacture natural anti-freeze. What these scientists have in common is a particular pattern of inquiry known as the scientific method. This may be old hat to you but bear with me while I summarize it again: the scientific method starts with observing a phenomenon in nature, formulating a hypothesis that explains that phenomenon, testing the hypothesis through an experiment, then evaluating the experiment’s results to see if it proves or disproves the hypothesis. Key to this process is that any experiment be reproducible. Although he lived thousands of years ago, you test Archimedes’ experiment on volume and mass any time you step into a bath. Whatever the field, the core of the science method is pure curiosity; the end result, new knowledge. Taken at its grandest, scientific inquiry is the search for truth. Developed during the “Age of Reason” in Europe, the scientific method (and a whole lot of mathematical calculations) allowed Copernicus to understand that the earth revolves around the sun, not the sun around the earth; Isaac Newton to determine that gravity controls the motions of men and planets; and Pasteur to discover that germs, not “vapors,” caused disease. Basic science is a quest to find out what is true in the world, not what we wish or believe to be true. If you have a beautiful hypothesis that holds that a great wind sweeps the sun up above the horizon each morning in the east but none of your experiments can prove the existence of that wind, well, sorry. You can’t call your hypothesis a fact. It is not true, though you may dearly wish it to be. To dally about with scientific facts to advance specific short-term political objectives, as has happened with great regularity during the past eight years in the United States, degrades history. Furthermore, it adds to the public’s confusion about how science takes place. We’re all very interested in the results of science—it has given us DNA-splicing, remote-controlled machines that rove Mars, and global communications not dreamt of just decades ago—but very few of us have any understanding of the slow, labor-intensive process scientists follow to make their “eureka” discoveries. Muddling the data, dancing with numbers and conclusions, picking among the results of research for those conclusions that support a preconceived notion—that is not science. Edward O. Wilson, the renowned Harvard University biologist, gave his view of science and scientists in one of his books on consilience, the unified understanding of the natural world. “The scientists most esteemed by their colleagues are those who are both very original and committed to the abstract ideal of truth in the midst of the clamoring demands of ego and ideology. They pass the acid test of promoting new knowledge even at the expense of losing credit for it... Their principal aim is to discover natural law marked by elegance, the right mix of simplicity and latent power.” That childlike spark of curiosity leads scientists to their chosen fields. It is a shame that their work, particularly in the environmental field, should be discredited or ignored because it does not fit in the box carved for it by politicians.