Down a winding road, 10 miles into the dense forests of Washington County, lies the village of Grand Lake Stream. Wedged between two of the largest lakes in eastern Maine, the town is bisected by its namesake stream, which teems with landlocked salmon and brook trout.  Grand Lake Stream was founded on the backs of mighty eastern hemlocks that grow in its rolling hills. In the 19th century, the tannin-rich bark of these forest giants supplied the town’s leather tannery, at one time the world’s largest. After fire destroyed the tannery, residents turned to a new industry to keep the village afloat. Numerous lodges and sporting camps popped up along the banks of the stream and shores of the lakes, attracting a burgeoning American middle class craving an escape to the Maine wilderness for peace and quiet. 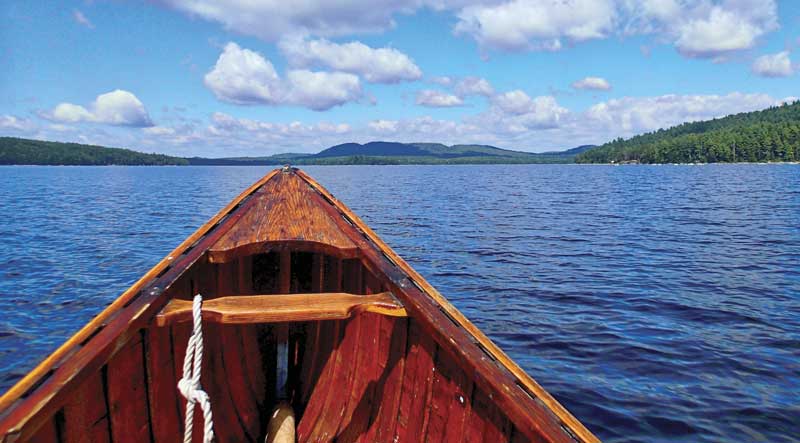 Heading out in a Grand Laker.

Grand Lake Stream quickly became a mecca for sport fishing and outdoor recreation.  Registered Maine Guides carried “sports” in wooden-ribbed, canvas-covered canoes, paddling in search of the day’s catch. With the invention of the outboard motor in 1907, a new style of canoe was birthed. With an average length of 20 feet and a squared stern to hold the motor, guides began handcrafting these long canoes to cut through the notoriously wind-swept, interconnected lakes of the region. Both practical and stylish, these boats quickly became the guiding industry standard and were aptly named “Grand Lakers.”

In the 1990s and early 2000s, policies of unencumbered public access to large tracts of timber industry land were changing. Residents and business owners in Grand Lake Stream saw a prevailing threat to their way of life, and decided to take action. Working with conservation partners, a community-led effort protected a 260-acre swath of stream shoreline from a major housing development in 1994.

In order to formally expand these conservation efforts, Downeast Lakes Land Trust was founded in 2001. By 2005, the first major conservation victory was completed. The Downeast Lakes Forestry Partnership, an ambitious collaboration with the New England Forestry Foundation, protected public access to the 312,000-acre Sunrise Easement as well as the 50-mile St. Croix Corridor along the border between Maine and New Brunswick.  The Partnership also purchased more than 27,000 acres of working timberland to be owned in fee by Downeast Lakes Land Trust and managed as a community forest. The project was hailed as a milestone of conservation in New England, and continues to have a lasting impact on the environment and traditional economy of the region. 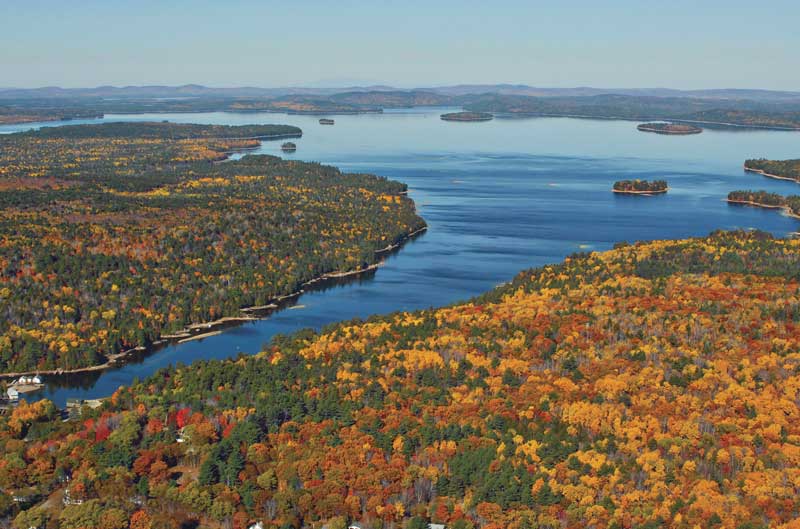 Additional purchases of contiguous parcels have since expanded the region’s conserved land with the formation of the 55,678-acre Downeast Lakes Community Forest, which is managed for wildlife habitat, public recreation access, and a sustainable timber economy. Birthed from kitchen table conversations in a small town, the Downeast Lakes Land Trust and its partners have assembled the largest community forest in the United States.

Downeast Lakes Land Trust continues to contribute to the long-term economic and environmental well-being of the region by protecting lakeshores, improving fish and wildlife habitat, providing public recreation opportunities, offering outdoor educational programs, and supporting jobs in the forest and on the water. Lodging, tourism, and guided recreation continue to be the main economic drivers in the tiny, but mighty, village of Grand Lake Stream.  And as for the Grand Laker canoe?  Local craftsmen still build and repair these storied craft, now using local timber, which they are entitled to harvest for free as one of the many local economic benefits of the Downeast Lakes Community Forest.

This page is sponsored by the Ocean Ledges Fund of the Maine Community Foundation with the goal of supporting education and conservation.