Beth Alison on the road to the launching ramp. Anne and Seth Porter (L-R) helping.
Photo - Michael Porter collection
I was pleased to see the recent article by Sharon Lovejoy in maineboats.com about the "Island Market Boat," a sharpie used to deliver fresh produce to coastal communities. It got me thinking about sharpies and that, in a roundabout way, got me to thinking about the connections among areas all up and down the coast that have similar conditions. The sharpie as a type went from Long Island Sound, where it was used for oystering, to the North Carolina sounds – this according to the marine historian Howard I. Chapelle – and from there to Florida. These are all places with similar conditions: skinny water that has a tendency to get pretty choppy when the wind blows. Even in the late nineteenth century there was a close tie between places on the coast, even quite distant places. The sharpies of North Carolina evolved somewhat differently from those of Long Island Sound, but the name was retained. But I digress; the market boat sharpie Beth Alison is in Maine instead of Long Island Sound because I built it in 1980-1981 for an owner who was really interested in the type. The boat is basically a New Haven Sharpie from Chapelle's American Small Sailing Craft but I modified the design to take an inboard auxiliary engine (originally a Gray "Sea Scout," if memory serves, rebuilt by the owner). I also gave the boat leeboards instead of a centerboard (to free up the middle of the boat) and two solid bulkheads (to give it more strength). 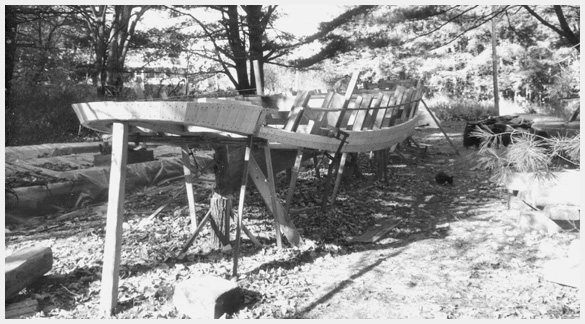 Frames set up and partially planked in the fall of 1980. Note the vertically staved stern.
Photo - Michael Porter collection
The Beth Alison is 35 feet long and 7 feet wide, and when acquired by David Berry, who has since become a friend (one of the good things about boats is that they make you friends along the way), it had two 42-foot unstayed masts in the old "shallop" rig (I refuse to call it a "cat-ketch"). The boat is quite rugged, with 11⁄4" local pine planking (cross-planked on the bottom) and oak frames and a round staved and splined stern. I was quite surprised to find that a former professorial colleague from Tulane University , Ann Royal Arthur, gone now these 20 years, knew all about sharpies and remembered sailing often in her grandfather's. She hailed originally from Morehead City, on the coast of North Carolina, where the sharpie was still an important workboat type in her childhood. Needless to say, we found common ground in the history of small craft from our quite different perspectives, and one day we got to talking about schooners. In one of these conversations, we discussed the well-documented fact that a certain type of schooner, built in Essex, Massachusetts, was known locally as a "heeltapper" and we agreed that the agonies historians went through to explain the name (that the short, raised quarterdeck may have looked like the heel of a boot, for example) were not very satisfactory. Now, Ann was a philologist who knew a lot about words and was very interested in them, and she mentioned to me that she remembered hearing her grandmother, who was from the North Carolina coast and who would have been born around the time of the Civil War, say about someone walking fast: "There he come, a-heeltapping down the street." Given the clear connections between New England and North Carolina, and the fact that these connections persist in language even when the objects referred to diverge, the idea that these schooners were called "heeltappers" because they were fast and someone happened to know the Pamlico Sound idiom seems much more plausible than any theory about boot heels. The sobriquet "heeltapper" does not seem to have lasted long, nor is it too likely that a lot of sharpies will be built in Maine, especially in the traditional way. But the "Island Market Boat" gave me a lead-in to a solution for a problem in maritime history. This happens. It is the way of the coast that connections exist all up and down it, and any starting-point will draw you into a bigger skein than you might have imagined. Photo Gallery:
Roll over numbers to view thumbnails 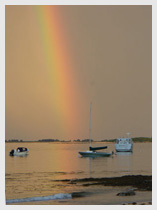 Michael Porter's mooring.
Photo by Leah Arsenault
Marine designer and consultant Michael Porter lives and works on Chebeague Island. He has spent his life in and around boats, even during periods when he was not involved with them professionally. He has run a boatshop for some 25 years, building boats (mostly to his own designs) and doing repair work as well. Click here to find out more about Michael Porter. Click here to read other features by Michael Porter.