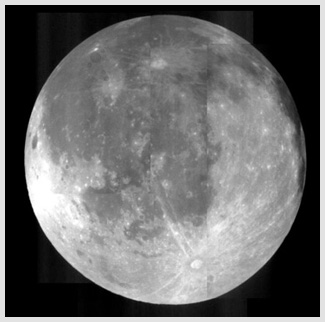 Photo courtesy NASA/nasaimages.org
Managing one’s own life is hard. Each day the needs of others barrage one like tiny meteors, pulling at one’s orbit. Your children pull you this way, your aging parents pull you that way, your friends think you should do X but your spouse thinks you should do Y. Remembering what your own course may be and sticking to it grows ever more complex as the decades pass. Now imagine if you were the moon! It’s a tough life, being the satellite of a major planet. In the first place, everyone knows you’re just a composite of matter ejected from earth eons ago and cobbled together in space. You don’t have any water, in fact, you never had any water so your mineral composition is paltry compared to your parent planet. Despite your pearly complexion, you have no light of your own, just the reflected glory of the sun (actually, none of the planets or moons in our solar system generate their own light; that is a feat reserved only for stars). And your orbit is not of your making either – Newton saw to that. You are in a perpetual pas de deux with earth and, most of the time, earth is leading. I started pondering this relationship as July’s full moon date swung into view. That familiar face, the Old Man in the moon, will beam down upon us once more, as he has done for the last 4.4 billion years. I confess that sometimes I grow tired of the visage. I am curious about what lies on the Dark Side of the moon, as Pink Floyd termed it. But, like 99.999% of living souls, I will never get to see that part of the moon. 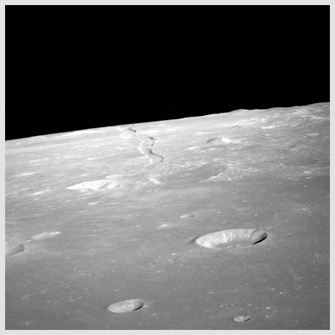 Photo courtesy NASA/nasaimages.org.
CLICK ON PHOTO TO VIEW LARGER
Why? Because of the great dance that goes on each month between the moon and the earth. While the moon is definitely the slighter figure in the couple, gravity gives the moon a certain amount of clout. We all know that the moon causes ocean tides here on earth. The mass of the moon exerts a gravitational tug on the region of the earthly ocean that lies closest to it. On the opposite side of the earth, the ocean also rises, in part because there’s NO moon tugging at it and in part because of the pull of the much larger but far distant mass of the sun. Our two daily tides ebb and flow because a different part of the earth is forever coming under the pull of the moon due to the earth’s rapid rotation around its axis. The moon, however, does not spin rapidly. The greater mass of the earth drags at the moon’s rotation, slowing it to its current rate of ten miles an hour. Because the moon spins so slowly, it takes about a month for it to turn once on its axis. Thus the earth and the moon are now in a remarkable ballet that astronomers term “earth-lock.” We always see the man in the moon when the full moon comes around because it takes precisely that long for the moon to complete one full rotation around its axis. Weird. No wonder the moon figures so largely in mythology. Wherever our ancestors lived on the earth, in any past century or age, they too saw exactly what I see today. For some it was a face, for others it was a rabbit or other creature. Only the Apollo astronauts have seen the face of the far side of the moon. 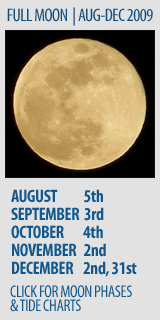 Gravity, as in any relationship, has two sides. Just as the earth affects the moon’s rotation, so too the admittedly slight mass of the moon inexorably slows down the earth’s spin. As I mentioned before, the moon raises up a bit of whatever part of the earth is nearest. That chunk of land or water rises and then subsides as the earth’s rotation whirls yet more land under the moon. This rising and falling causes friction. That friction causes the earth’s rotation to slow down ever so slightly each year -- approximately a millisecond every 50 years. As the earth slows, its gravitational lock on the moon is just a tad less. Astronomers have shown that the moon is slipping away from the earth by about an inch each year. Eventually, the earth and the moon will reach a stalemate. The moon will be too far away to cause the earth’s rotation to slow further; at that point the earth’s gravitational tug will stop the moon’s outward migration. The rotation of each body will be synchronized to the other. Of course, by that time the glaciers will be gone, the level of the sea will have risen untold feet and the hardwoods of New England will be a distant memory. Yet, barring a disfiguring smack from a wayward asteroid, I can imagine that familiar face still gazing placidly down on our far-in-the-future progeny, as it has for so long on us.