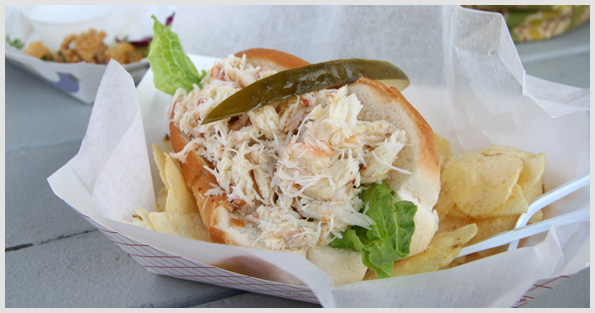 How many crabs does it take to make a crab roll?
It’s a few days after Labor Day and my friend has given me a dozen steamed crabs. “Oh boy!,” I say, visions of hot crab dip dancing in my head. I empty the bucket of pale pink and beige crustaceans into the sink. The haul is comprised mostly of Atlantic rock crabs, Cancer irroratus, and a few roundish Jonah crabs, Cancer borealis. Various legs have come off the bodies and a fair bit of pungent liquid is sloshing around the sink. Never mind, it's time to get started. There’s crab dip waiting to be made! 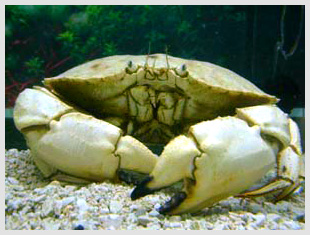 After picking the meat from the
Atlantic Rock Crab would you be willing to share?
Courtesy U.Mass Biology Dept.
I crack the first set of major claws, leaving the eight remaining legs on the body. “Ouch,” I mutter under my breath as a barb above the claw’s knuckle stabs into my thumb. A tiny slug of crab meat drops into my bowl. Sucking on my bleeding thumb, I turn to the eight walking legs. I snap one section of one leg at a bend, carefully drawing two slim bands of meat from the shell and scraping them into the bowl. “My, that bowl seems rather large,” I muse before turning back to the remaining legs. And then to the body. Using a grapefruit knife I wedge the tip beneath the joint that once housed a walking leg. Slowly exerting increasing pressure I pop the joint from the body — somehow spraying crab bodily fluids all over my shirt, hair and glasses. “Damn!” Nestled within the leg cavity is a nice wedge of crab meat, perhaps all of a ¼ inch in size. Plop! It goes into the cavernous bowl. Cancer irroratus (rock crab) is a nice looking crab, as crabs go. Its shell is fan-shaped and slightly yellow with red spots. It has nine teeth and breathes through grey-colored gills tucked within its carapace. The crab draws water through its gills and then exhales it at its mouth, making little bubbles as it does so. A Jonah crab’s shell is slightly broader than a rock crab’s and is more reddish in color. Each can be found nibbling away at the bait in lobster traps. Neither species gives up its meat easily. 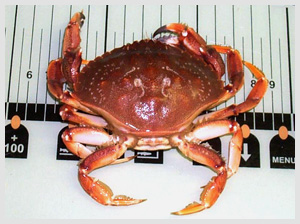 Photo Courtesy U.Mass Biology Dept.
Crabs were once considered just a nuisance by Maine lobstermen. Who could blame them? Crabs are voracious eaters, the vultures of the sea. They are carnivores and, like many meat-eating creatures, will take the path of least resistance when it comes to getting a meal. A nice bag of rotting herring, a fish head here or there, or a drowned or beached animal—all are welcome entrées to a crab. In the past decade, however, rock, Jonah and even pickytoe [isn’t it peekytoe?] crabs, while still a nuisance to lobstermen, have become commercially valuable species, and are now saved from lobster traps and sold to seafood buyers and brokers. There are ten leg cavities still to excavate. At this point the cat comes to rub around my legs, for I seem to be spraying bits of crab meat about the kitchen as I search for the tiny pockets of meat. “Ugh,” I say as I pull the entire gill chamber by mistake from one side of the late-lamented rock crab. The feel of the grey gills on my fingers is like cold wet cellophane and decidedly not appetizing. Into the compost bucket they go. OK, now one crab is done. I wipe the crab specks from my glasses, gaze wistfully into my nearly empty bowl, and turn back to the sink, where 11other crabs sit at doleful attention. 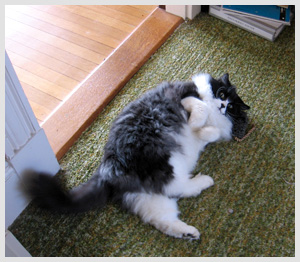 The author's cat, post crab-rolling.
A solid hour and two glasses of wine later, the sink, counter, cat, and myself are covered with crab juice, I am bleeding from numerous wounds which, due to the fact that crab shells are made of chitin, are beginning to swell, the compost bucket is overflowing onto the floor, and I have gained perhaps 12 ounces of precious crab meat. Enough to share? Unearthing delight can be hard work. I’ve found that it often comes from very simple things. With an undamaged finger, I dip into my horde. Salty, damp, I savor the delicate, slightly rank taste of the sea.