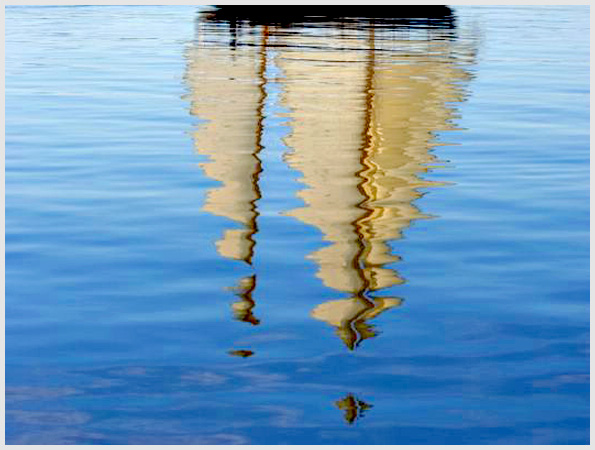 A quiet day on Penobscot Bay. Photo by Jamie Bloomquist
I like quiet. Not that I am averse to raucous music now and again, or the chatter and confusion of a house full of relatives or the cheerful chaos of children playing wild games outdoors. It’s just that for me, a good dose of silence is like a thick warm blanket under which I can relax and think about the world in which I live. I was loitering down at Ash Point Beach in Owls Head the other day. The sun was warm and the air was cool and when I lay down, the rocks became my own private sauna. The sky was empty of clouds and the water was very, very still. Prone on the rocks, I could hear almost nothing for a few good minutes. You should understand that the afternoon’s nothing included the thin cries of foraging crows on little Ash Island, the occasional ululation of an annoyed seagull, the swish of the ocean grazing the cobble beach at low tide, and the burble of melt water trickling through a storm pipe onto the beach. I lay still and listened to my nothing with great contentment. As far as my relatively good ears could hear, no engines were running in the vicinity. No airplanes droning into the Owls Head airport, no motor boats blatting away out at sea, no chain saws, snow blowers, lawn mowers, or even car engines cluttered up the silence of those moments. Spring, of course, is a good time of year for quiet. Everything is in preparation but not yet in action. Lobstermen are still working on their gear or just beginning to set their traps along the shore. Commercial and recreational boats haven’t made their way to sea yet – no picnic boats, no towering sport fishing boats, no temperamental skiffs, and just a few fishing vessels heading off the coast. The grass is still dormant, perhaps dreaming of the green of summer, but nothing needs to be mowed, chopped, or weed whacked yet. Even the ocean is still asleep, its water clear as glass, vivid green phytoplankton waiting for the spring influx of river water bearing with it a burden of vital nutrients in order to burst into life come summer. I was entering my fourth decade before I read Henry David Thoreau’s Walden. For years I scorned this bible of back-to-the-landers and hippy environmentalists with its seemingly unrestrained ramblings about nature. Then one summer Walden wandered into my house and I sat down to read it. Good book. Thoreau certainly had a handle on the notion of quiet, though his mind was never such. Likely he would be appalled at how loud and quick-paced we’ve made our world and ourselves. In the chapter entitled “Solitude” he neatly captures what happens when one calms oneself enough to contemplate the natural world, as I had the great good fortune to do on Ash Point Beach: “By a conscious effort of the mind we can stand aloof from actions and their consequences; and all things, good and bad, go by us like a torrent.” The days will soon tumble by us in all the frenetic urgency of summer but for right now, as we sit on the cusp of May, it’s a fine time to enjoy the quiet.