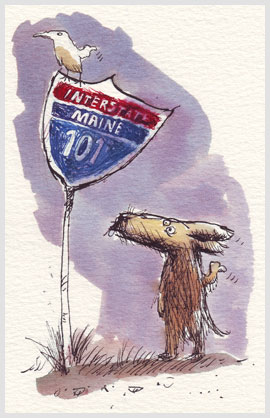 Hunting for my mooring stone in 10 feet of frigid water or trudging through the slush of a late April snow storm or just bouncing along over a Maginot Line’s worth of frost heaves on the way to a quart of milk can set a man’s mind to wondering as to why, exactly, he continues to be so affectionately engaged by life along the Maine Coast. Take this morning, for instance. I’m soaked and grungy from crawling around under the little camp I rent out during the summer, searching out the season’s blossoming of burst pipes. Soon I know I’ll be back under there sweating in new couplings. My propane torch will flare and pop off at inopportune moments. Instead of sizzling smoothly into the joint like it shows in the book, my solder will jump around like an ill behaved spaniel. Before this job is done, I’m sure to blister a finger. Some part of my clothing might actually catch fire. But for all the fumbling around I do each year, I know I’ll learn something about plumbing and this gives me hope that one day the act of getting water to stay put in pipes won’t call for three changes of clothes. Last year, for instance, I picked up the old Wonder Bread trick. You wad up a slice into one of those spongy balls that little boys find so intriguing and stuff it up the pipe to staunch the trickle of water that, otherwise, keeps the copper too cool to properly draw in the solder. When the pipe is repaired, the bread simply dissolves. For me it’s a great fix. Not only is a wad of Wonder Bread at about my technological level, afterwards I’ll make a peanut butter and jelly sandwich from the leftovers and celebrate yet one more triumph over the elements. And, Lord knows, what this coast has is plenty of elements. Even though the ocean is out there all the time and it’s plenty big enough, the coast and the life I lead along it, is mostly about little stuff. This explains why, after the forty some years I’ve been around here tinkering on one thing or other, I feel like I’m still taking the introductory course in living here. Maine Coast 101 (MTWTHFSS 6 a.m.-dark). Being kept back to take the intro course over and over might frustrate a lot of people. Instead of feeling frustrated, however, I find the life of a perpetual beginner interesting. With no big highways of expertise to swoosh me along on cruise control, I’m forced to notice what’s new around every corner. Because almost everything holds a challenge, I’m rarely blasé about results. So this spring when the pipes are fixed and I’ve got my tools rounded up, I’ll sit there on the ground for a minute in the gathering sunshine of a late April morning and think back to the moment when the guy at the general store said to me, “If you’re gonna to be fixing froze-up pipes, you’ll probably need a loaf of Wonder Bread....” Up at the store where I go for my Bangor paper every morning, I’ve heard just about everything by now, so when he makes this Zen master's pronouncement about bread, I’m ready in a wary sort of way. I’m from someplace else, after all. A place where not everybody knows that Wonder Bread has more than one use. I stand there, feet apart, knees slightly bent, expression neutral but focused. Up at the store a joke is allowed to hover. Nothing happens too quickly. Heads need to swivel my way. Stools may even shift slightly for a better angle. I set for the delivery. The wind-up. The pitch. “Oh yes, dear. You ball up some of that Wonder Bread and shove her up in there tight and it keeps the water out...” The pitch is a change-up. Actual information concealed in a spinning blur of humor. Lucky for me I’ve kept my head in. I didn’t step out of the box or swing too early with some lame joke of my own. And now I’ve learned how to sweat pipes better. My 6 o’clock class is done for the day.