Resistor: Pass it On

Doctor Bob is a stilt-walker. He puts on his multi-tailed jester’s hat and becomes a clowning reveler at parades and country fairs, up on his long wooden stilt-legs. He is also a retired professor of something, one science or another, as best I can tell; his car bears the “DNA” license plate. It is from him that my family first heard the story of Lech Walesa and the Polish resistors. No, that’s not a misspelling. I do mean electrical resistors. They look like small cylinders of plastic with colored stripes running around them, and a length of wire out each end. You get them at Radio Shack. When the Solidarity movement was getting started in Poland in the early 1980s, any obvious public display of sympathy with the nascent union was dangerous, and immediate arrest (perhaps with a beating) was certainly a possibility. Media were suppressed, tanks guarded television stations, propaganda and lies were the party line, and the very word ”truth” was bandied about in a meaningless Orwellian polit-speak. Taking back the language was as big a piece of the movement as was the trade union. The Solidarnosc badge having been banned, union supporters took to wearing a small resistor…an electrical resistor…the way we might wear a campaign button. According to a Finnish reporter, “School children removed electronic resistors from old radios and attached them as visible badges on their clothes.” Add to that, the symbol of the disassembled (silenced) radio. Add to that the fact that movement leader Lech Walesa was a shipyard electrician, so the “electrical connection” (sorry!) meant something as well. 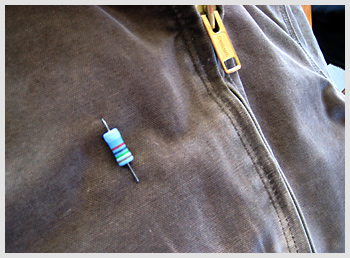 Doctor Bob wears a fairly large resistor on his jacket. He gave me one to wear when we met up at the Common Ground Fair a few years ago, as my husband and I examined the antique tractors and he readied his stilts for the garden parade. These days, in this country, you could take the symbol of the resistor a number of ways. It might simply be a tip of the hat to an historic victory over totalitarianism, or hearken to some Polish ancestry, but that’s just a beginning. It might signify that the wearer has a grasp of both some history and some science. It could be a mere wink at linguistic cleverness. It might mean one wishes to subtly resist something now…some issue of local or national politics, maybe, or some other offensive cultural trend. It is hard not to lapse into lame electrical puns, because such is our language…to resist the “current” policy, to resist the “power” structure…ah, yes. Bob reminded us that if we’re going to show that we are resisters by wearing resistors, we’d better learn the color codes so that we’re also scientifically credible. You don’t need a degree in electrical engineering for this; there are plenty of websites that explain the colored stripes. Resistance is measured in Ohms. This is not the same “Om” as in Hindu philosophy, but it was fun to see the Sanskrit “Om” replace the Greek omega, the symbol for resistance, in the electrical equations known as Ohm’s Law, in a bit of interdisciplinary college graffiti. If you don’t know what I’m talking about, it’s okay. Our children grew up with this stuff. Their father is a second-generation master electrician who cut his teeth on electric railways, came of age fixing radars on an aircraft carrier, worked substation repairs for Central Maine Power, and is now the operator of our municipal power station. He taught them about resistors as well as capacitors, diodes, and the rest of the guts of the electronics in middle school. (Their mother, insubordinate to a fault and sometimes in trouble for the same, strove to teach them about the other kind of resister.) When both happened to be taking physics, both found that they could talk circles around the other students when it came time for the electricity section of the course. Where other Matinicus Island kids grew up in the sterns of their father’s lobsterboats and know the seas like the backs of their hands, our two grew up in the powerhouse. They built working telephones at the kitchen table as children. They stunk up the place with solder fumes and called their grandmother in Florida as soon as the thing was up and running. They get electrician’s tools in their Christmas stockings and take computers apart as if they were Lego sets. Emily contacted us from school. “I need resistor earrings.” As soon as she was home on spring break, she and her dad went digging through an assortment of the little devices. I thought she might just choose for the best colors, but she, understanding the numeric significance of each stripe, was trying to find one that indicated her birthday or some other memorable sequence of numbers (and they ask us what we do around here all winter). We bent the wire from one end around to make a loop to hang from earring wires, cut the wire coming from the other side short, and she was all set to go back to physics class. I made a similar pair; let’s see if anybody in Rockland recognizes them for what they are. Doctor Bob would. Pass it on.