Views like this are why schooner captains and crews come back every season.
Victory Chimes, last of the three-masted schooners
There’s nothing like cutting it close. Wednesday, May 28, 2008, was launch day and May 30 was boarding day for our first batch of passengers, leaving us very little time to prepare. Our haul-out date had gotten pushed back due to other boats taking longer on the railway than planned. 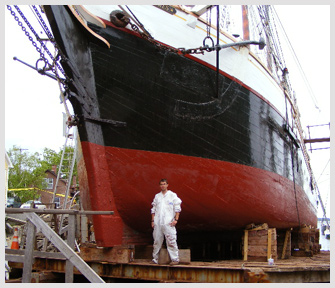 Victory Chimes on the ways at Boothbay Shipyard. May 2008
The result was that over the course of six days, we hauled out, washed down the hull, caulked and paid seams, put on 30 gallons of bottom paint, passed our U.S. Coast Guard inspection, and were all ready to go. Or so we thought. Alas, the shipyard was closed for Memorial Day, and then the winds turned hard NW, making a launch on Tuesday impossible. We finally made it back in the water at 0500 (yes, that’s 5:00 a.m.!) on Wednesday and were back at our berth in Rockland by noon. Then it was a scramble to make up all the bunks, clean the ship, and get the food loaded on board -- all by Friday at 18:00 (6:00 p.m.). We made it, though, and all my friends from Sugarloaf boarded on time (I had invited them out for our first run of the year). The weather was cool and rainy on Saturday, but turned nice Sunday. All systems worked fine during our shake-down cruise, and now we are in full swing and enjoying the Maine coast. Victory Chimes is the largest commercially operated sailing vessel under the U.S. flag.

Several captains from the Maine windjammer fleet have agreed to write about what it's like for them "behind the scenes" while running a passenger schooner. We will post their missives as we receive them. We also recommend that you come back later to read through them all for a sense of what an entire season is like as it unfolds. Click here to follow the schooners on their coastal adventures. . Click here for information about the Maine Windjammer Association.