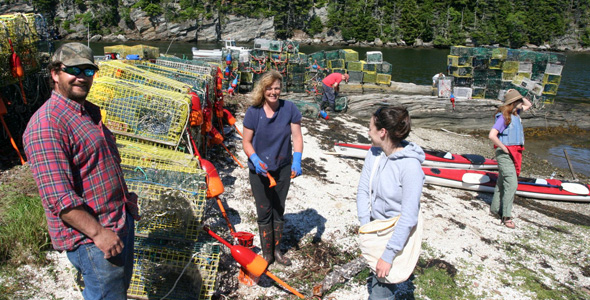 The usual mix on Malaga: lobstermen, visitors, and, out of camera view, archaeologists.
For more about the island’s past, see “The Secret ofMalaga Island” by John Gould (Issue 71,Autumn 2002).
MALAGA ISLAND, on the extreme eastern edge of Casco Bay, may be the centerpiece of some extraordinary nineteenth- and early-twentieth-century Maine history, but my visit was so weirdly NOW that many of the parties involved got the giggles. I (proud papa) arrived via Gizmo with my daughter Jesse, who was already deep into her own Malaga research toward a Master of Journalism. So it made sense that she was on a first-name basis with Jimmy and April McKinney. who were using the perfect June day to refresh their lobster gear. All obvious evidence of the famously mixed-race settlement that began here after the Civil War was dramatically destroyed by the state in 1912—the police even dug up the graveyard—but the island is still used as a communal trapstorage facility by locals, some of whom, like Jimmy, are now rather bemused by the hubbub being made over their ancestors. 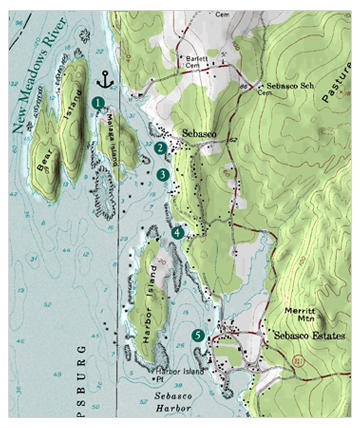 Click on the above image to download a PDF chartlet. (800kb)
But it was serendipity doubled when first Rich Knox, and then Rob Rosenthal, pulled up in kayaks. Knox is Communications Director for Maine Coast Heritage Trust (MCHT), which now manages the island, and Rosenthal is an audio documentarian working on a major Malaga project. Pretty soon there were business cards flipping around the little beach (1)—I even garnered a “Say, don’t you write for Maine Boats, Homes, & Harbors?” moment, which impressed the kid—and made the McKinneys chuckle hard enough to mess up their of Rosenthal and Hamilton’s hard work. For now, then, enjoy a Malaga peek, plus a cruise along the Sebasco shore, where you’ll first come across the dinghy dock (2) for Anna’s Water’s Edge Restaurant, followed by the just-built town pier (3), and (4) Casco Bay Boatworks, formerly Brewer’s and now a full-service yard. Finally there’s the splendid Sebasco Harbor Resort, where Jesse and I tied up and enjoyed lobster rolls on a patio overlooking the sea, not to mention a chat about Maine, the way it was and can be. Links: (2) Anna’s Water’s Edge Restaurant - www.thewatersedgerestaurant.com, 207-389-1803 (3) Casco Bay Boatworks - www.cascobayboatworks.com, 207-389-1300 (4) Sebasco Harbor Resort - www.sebasco.com, 207-389-1161, VHF 9
Credits: Chart based on the 1:24,000 topo maps Orrs Island and Phippsburg; 3-D by Memory Map. Article photos and chart enhancement by Ben Ellison. E-mail Ben (gizmo@benetech.net) about restaurants, parks, and the like that he can visit aboard the M/V Gizmo. Click here to travel with Ben Ellison and Gizmo on other coastal adventures on the Maine coast.