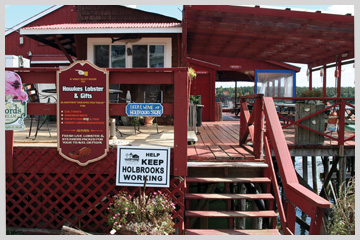 Holbrook's Wharf, saved by the Holbrook Community
Foundation for multiple uses. Photo by Ben Ellison
Last fall, nearly a year after they’d pulled off a working waterfront preservation coup, some dooryards in Cundys Harbor still sported “Help Keep Holbrooks Working” signs. The locals have every right to be proud: to secure forever Holbrook’s Wharf, a critical multi-use harbor property, the all-volunteer Holbrook Community Foundation (HCF) cajoled more than a million dollars and untold hours from 500-plus individuals and a panoply of non-profit and government entities, including a significant grant from the tiny Harpswell hamlet itself, the latter approved by a nearly unanimous vote. Last summer Holbrook’s Wharf (1, 207-729-9050)—half commercial fishing operation, half lobster and ice cream nirvana—was back in business, along with the Holbrook General Store and historic Trufant House (now apartments). If anything, HCF (holbrookcommunityfoundation.org) is gaining momentum. This season, visiting boaters will find 100' of new float space and sweet water from a new desalinization system. Next winter’s major overhaul of the fishing side—sometimes the site of tuna landings—should make hanging out at Holbrook’s even more gratifying. While bigger yachts will be challenged to moor or anchor in busy Cundys Harbor itself, it’s only a mile across the New Meadows River from the Malaga Island anchorage (2, also see issue #95, in print or online) and a little more than two miles from the fabulous Basin Preserve (3). The intrepid can no doubt find a dinghy/foot route to Holbrook’s from upper Ridley Cove (4), where the gunkholing is better than the chart suggests. Bethel Point (5), incidentally, has a paved public launching ramp that is good even at nearly dead low tide. Once in downtown Cundys Harbor, note that Watson’s Store (6, 207-725-7794) has boat supplies and the Block and Tackle (7, 207-725-5690) is your alternate source of succulent seafood. The charted cupola midtown marks the Captain’s Watch B&B (207-725-09790), which also offers skippered daysails; across the road is one of the cutest libraries ever (207-725-1461), which, like the general store, offers free WiFi Internet access. When you’re sitting over your steaming crustacean at Holbrook’s, feeling good about helping HCF in a small way, know that the lovely forested expanse of Meetinghouse Hill that you see across the “river” has also been protected recently, as part of the Nature Conservancy’s rather amazing new 1,910 acre Basin Preserve (shaded in green). A warning: you may be inspired to make more direct contributions to one or more of the organizations that work so hard to conserve the coast, both wild and working.
Click on the image below to download a PDF chartlet. (400kb) 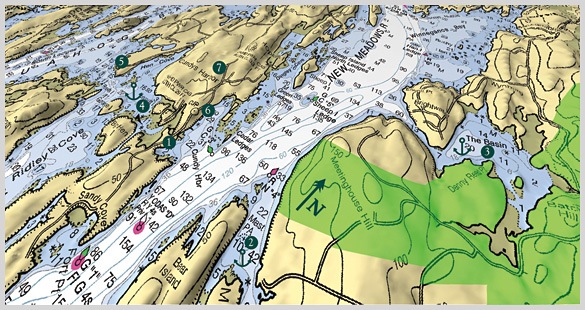 Links: Holbrook Wharf Restaurant & General Store (207-729-9050, www.holbrookcommunityfoundation.org) Malaga Island anchorage, (www.maineboats.com/coastal-adventures/gizmo-95) The Basin Preserve, The Nature Conservancy, more information, and a great map, at: http://www.nature.org/wherewework/northamerica/states/maine/press/press2... Captain's Watch B&B (207-725-09790, (http://home.gwi.net/~cwatch/), which also offers skippered daysails, and across the road is one of the cutest libraries ever (207-725-1461).

Credits: Chartlet based on NOAA chart 1329. 3D effect by MemoryMap, adapted by Ben Ellison. E-mail Ben (gizmo@benetech.net) about restaurants, parks, and the like that he can visit aboard the M/V Gizmo. Click here to travel with Ben Ellison and Gizmo on other coastal adventures on the Maine coast.