On a great breeze, Angelique scoots across Penobscot Bay. Photo by Fred LeBlanc
Day One: The crew climbed aboard with their duffels and sleeping bags in hand on April first. Angelique was still covered from stem to stern in shrink-wrap. A makeshift "galley" was put together: two-burner camp stove, an extension cord, a $10 coffee-maker, a hand-me-down microwave, and a couple of jugs of water. We breathed some life into the batteries with the chargers and coaxed one of the heads into working order. Schooner crews are hardy souls. 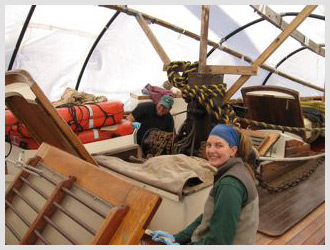 A lot of work gets done under the shrink-wrap.
Angelique was a cold and lonely place in early April. The crew spent many weeks sanding and painting, followed by removing the cover, more painting, and varnishing. Topmasts were raised from the deck, booms and gaffs hung, running rigging run, followed by the bending on of the seven heavy sails, and a haul-out for a bottom cleaning and Coast Guard inspection. Finally we got to lay out the braided rugs in the deckhouse and hang the pictures on the bulkheads. The moment the crew had been waiting for, the day to head “out there,” where vessels belong, arrived. The crew was happy to trade in their paintbrushes for brass polish and glass cleaner. 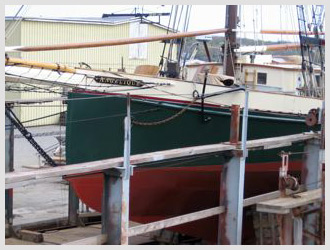 A haul-out is part of preparing for the season.
Their excitement was contagious. Even though this season marks my twenty-second year as owner (along with Lynne my lovely wife) and captain of Angelique, the excitement of their anticipation even rubbed off on me. Twenty two years and I felt like a little kid getting ready for an adventure for the first time. Our guests arrived, and settled in for the evening, and suddenly Angelique became warm and cozy, a far cry from those frosty April days. Laughter and conversation filled the air. Chad, our cook, treated us to blueberry pancakes, sausage, and juice for breakfast. Soon we closed the boarding gate, took in our lines and headed out of Camden Harbor. 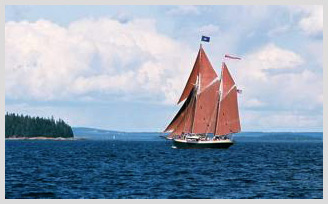 "It felt like we had never left." Photo by Brian Sutton
We were greeted by an 18-20-knot breeze when we reached the Camden “R2” bell. The four lower sails were set: first the mizzen, followed by the mainsail, staysail, and jib. Angelique fell off onto a port tack, slowly heeling, dipping a shoulder into Penobscot Bay. It felt like we had never left. I couldn’t help but notice the grins on the faces of guests and crew alike as we gathered speed in the northeast breeze. Our wake framed Curtis Island Lighthouse behind us as we set our course east with North Haven island in the distance. Angelique was once again doing what the ship was meant to do. It’s good to be back! Captain Mike McHenry At Anchor in Cradle Cove, Maine

Several captains from the Maine windjammer fleet have agreed to write about what it's like for them "behind the scenes" while running a passenger schooner. We will post their missives as we receive them. We also recommend that you come back later to read through them all for a sense of what an entire season is like as it unfolds. Click here to follow the schooners on their coastal adventures. . Click here for information about the Maine Windjammer Association.