Sure Cure for Mid-Winter Blues

Boats don't come much newer than this. Hull #1 on its first day in the water.
Launch Details:

Particulars: On a bone-chilling January day when we visited, Boston Harbor was virtually deserted, except for the docks at Boston Boatworks. There sat Grace, Hull #1 of MJM Yacht’s brand-spanking new 40z, attracting a swarm of visitors. The boat glistened under a thin winter sun, a glisten due in part to its metallic-grey Awl-Gripped hull but mostly thanks to the crust of ice on the topsides from a northeaster the night before.

The MJM 40z displays the agility of a much smaller boat.
(Please note: underway photos were shot on a different day than the MBH&H sea trials.)

It was blowing like stink, 25-35 northwest straight down from Canada, and the thermometer read 28 degrees. No matter, the 40z’s cabin heater converted chilly salt air to a distinctly Florida-like 72 degrees inside. The cozy cabin and the boat’s novelty made it the busiest yacht in the harbor, with a steady stream of brokers and prospective customers there to take MJM’s new baby out for sea trials.

MJM is the brainchild of Bob Johnstone, and the brand’s distinctive designs reflect his own growth as a boater. He and his wife Mary loved sailing, and for many years they enjoyed wringing out the numerous new models generated during Bob’s tenure at J-Boats. Eventually Mary tired of banging about on fast ocean sailboats, and the couple began spending more and more time on their well-worn Dyer 29 powerboat. The change nudged Bob to re-imagine the cruising powerboat. Bob realized that his own family was living out the same progression that many enthusiastic sailboat owners go through—moving from speedy little racers to comfy cruisers and eventually to power. He believed that the proven J-Boat formula of light weight and high strength could work wonders in a powerboat, and would allow ample performance with modest power requirements.

As a lifelong sailor, he wasn’t about to settle for just another gas-guzzler. “The only way to break the fuel barrier and still have a powerboat that will cruise at a respectable 25 knots,” said Johnstone, “ is to go stronger and lighter.” With an eye-catching new design by Doug Zurn in hand, Johnstone found his ideal builders at Boston Boatworks, renowned for their exotic sail racers. The new team cooked up a featherweight ocean-going powerboat that employs an epoxy pre-preg/Kevlar/E-glass/Corecell vacuum-bagged and oven-post-cured composite hull and deck structure that would do any racing sailor proud.

Their first effort, the 34z, was light but stout. It was swift, seakindly, easy for two to handle, and sipped fuel compared to other boats in its size-class. Its shape blended a dry-running Carolina sportfish flare forward with a practical down east-style cabin and cockpit layout. The 34z’s narrow beam allowed it to be trailered without special permits, to ease costs of trucking between summer and winter homes. It was the right boat for the times, and the recent addition of a junior sibling (the 29z) helped MJM sell 100 boats in its first 5 years.

The 40z embodies all of those good MJM things, but more so. The new boat even boasts solid Maine connections. The hull and deck mold tooling was completed at Union River Boat Co of Bucksport. Stainless steel grab rails and assorted water-jet-cut hardware came from Nautilus Marine Fabrication in Trenton. The Stratglas cabin side curtains are by Mobile Marine Canvas of Harpswell. The computer-cut, hand-finished woodwork came from Wood & Company of Ellsworth. Forward, the interior offers oodles of space in the master stateroom, head, shower, and galley. The bridge deck, salon and cockpit all sit at the same level, thanks to having the engines nestled belowdecks back near the transom. To update the old saw, the 40z “cruises 4 (6 in a pinch), feeds 10, and parties 15.” Doors on both sides of the cockpit ease entry/exit, with the threshold at standard dock level.

Back to Boston Harbor, where all eyes were on Grace as the captain idled the boat back to the windswept dock—the boat pirouetted, crabbed sideways against the insistent northwester and ghosted up to the dock, gently backing and filling. Credit Volvo’s new joystick-controlled IPS Pod drives for this display of effortless close-in maneuvering. A distinguished looking silver-haired gent stepped lightly out onto the dock through the cockpit side door. “How’d she go?” somebody asked. “Well, we blew all that ice off the foredeck soon as we hit 35 knots,” he laughed, then disappears up the gangway. The beaming smile of Grace's new owner spoke volumes.

On our own test ride, Johnstone ushered me behind the wheel and said, “Open her up.” It’s not every day somebody hands you the helm of a brand new million-dollar yacht and tells you peg the throttles. OK, so almost immediately I started freaking out about going 38 knots into a nasty head chop. Just as quickly the worry subsided, as the 40z settled into a gently rocking rhythm where the loudest thing was not bellowing engines, but the rush of water and wind around the hull. Here were five people, sitting around the cabin in total comfort, chatting in normal voices while roaring across Boston Harbor in midwinter. We might was well have been cocooned in a leather-lined Volvo wagon cruising down I-95.

The sensation of speed was dulled by the smooth ride and absence of noise, until a look over my shoulder revealed a fountain of whitewater blasting out from under the fantail and arcing back into a truly impressive wake. Just as quickly, I went back to hawk-eying the water ahead for logs, debris and all the other stuff you’d better watch out for at speed in a big fast boat. Later in the ride, Johnstone demonstrated the 40z’s sea manners. We were punching head-on into a line of sharp rollers, and he bore hard off the wind without easing the throttles. The boat leaned into the turn and headed off to surf down the whitecaps without a hint of that queasy lurching/pitching motion that so many powerboats display when turning off the wind. Jaguar, the famous maker of British sporting sedans, built its cars to display “grace, space and pace.” After that memorable winter boat ride in Boston Harbor, I’d wager that if Jaguar built yachts, they’d come out like the 40z. –Dave Getchell 40z Hulls #1 and #2 are headed off to travel the boat show circuit, so look for them at a show near you soon. 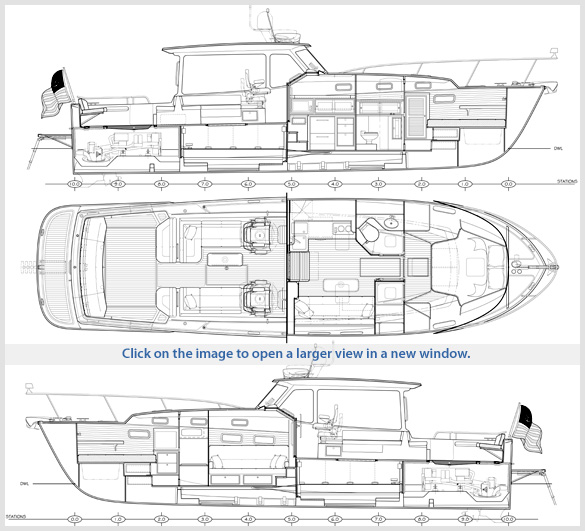 Click on the image above to open a larger view in a new window.

image gallery
Roll over numbers to view thumbnails. Click on the number to select an image.
Flash Player is required to view the slide show above.
If the slide show does not load, click here to download free Flash Player for your browser.
Information and specifications supplied by the builder. Every effort has been made to ensure accuracy. However, Maine Boats, Homes & Harbors accepts no liability in the event of any errors of fact or omission.