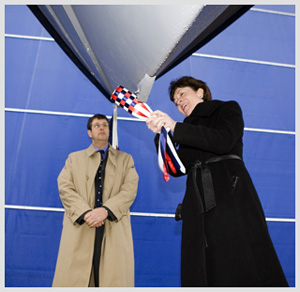 Click on the play button below
to watch a video of the christening.

January 11 was a big day for Maine and a really big day for East Boothbay. In a shed on a stage at Hodgdon Yachts were all the big wigs: a University of Maine president, a Navy Commander, a U.S. Congressman, a U.S. Senator and Maine boatbuilder Tim Hodgdon. They, and the crowd gathered inside, out of the cold and wet, were there to christen a new prototype ship for the U.S. Navy: Mako, an 83’, all carbon-fiber patrol boat, a Mark V.1 Special Operations Craft. All of the dignitaries on the stage had played a part in getting this prototype built in carbon fiber and built in Maine. The Hodgdon family has built boats and ships in East Boothbay since 1816. While the focus of late has been on very-high-end yachts, this is not the company’s first military vessel. Hanging proudly over the doors of the big shed on the day of the Mako’s launching waved the Navy “E for Excellence” flag that Tim Hodgdon’s father and grandfather earned in 1942 via the work the yard did helping to build wooden minesweepers and troop transports during World War II. In recent years, Hodgdon Yachts has launched a number of impeccable large yachts, power and sail, that have married the best properties of wood, epoxy, and carbon fiber. Five years ago, Hodgdon formed Maine Marine Manufacturing, LLC, of Portland, to explore taking what they had learned while building high-tech pleasure yachts into the military market. The company approached the University of Maine’s Advanced Engineered Wood Composites (AEWC) Center and Maine’s congressional delegates for help with both the technology and the governmental liaisons. The launch of Mako was culmination of a lot of hard work by all parties involved, not all of it visible on the shop floor. A release from Hodgdon Yachts explained that the “intent of the MK V.1 program is to produce a boat that can operate in rough seas while minimizing the vertical acceleration, or "slamming" felt by Special Operations crew when the boat hits a wave. The MK V.1 hull and deck are constructed from impact-absorbent composite materials that were specially engineered and extensively tested at the University of Maine's AEWC Center composites laboratory.” "The MK V.1 should offer Special Operations Forces a more stable ride with the potential for fewer injuries to the troops it carries than patrol craft currently in use. The U.S. Navy will soon conduct extensive field-testing to confirm the laboratory test results. The MK V.1 launch is the latest outcome of a successful alliance between Hodgdon Yachts and the University of Maine that began in 2003. This alliance combines the craftsmanship of Maine's skilled boat builders from Hodgdon Yachts, with the innovation and research capacity at the University of Maine's AEWC Center to produce a new generation of naval vessel.” While not at the sumptuous level of finish that is expected of a Hodgdon yacht, Mako is an extraordinary piece of work, clean in all details. I would love to go for a ride at 60 knots, but on smooth seas to be sure. I’ll leave the real testing to the SEALS. 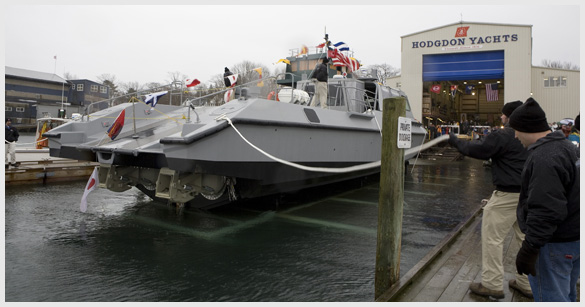 Launch of the MK V.1. Photo by Billy Black
This $15 million prototype could lead to many more jobs in East Boothbay and other Maine towns if the Navy decides to use it as a replacement for the aluminum fast patrol boats they are currently using. Two years of testing will tell the tale. 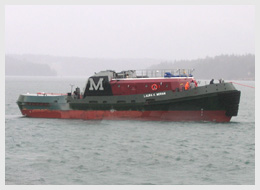 And that wasn’t the only launching happening in East Boothbay that day. Within 100 yards of the speeches at Hodgdon, Washburn & Doughty Associates launched the Laura K. Moran, the 16th tugboat they have built for Moran Towing of Greenwich, Connecticut. This 92 foot Z-drive tug splashed without much fanfare. Only yard workers, families, friends, and people from Moran were there as the steel commercial vessel slide down the ways in traditional fashion. Then the shop was quiet for a while as everyone joined to eat chowder and chili (this must be an East Boothbay tradition—the same fare was served at the Hodgdon launch). Soon enough the shop would be filled again with the noise of 80 shipbuilders grinding, hammering, and welding. Three more tugs are in the works for Moran Towing. Boat name: Laura K. Moran Model: Z-Drive Tugboat Builder: Washburn & Doughty Associates P.O. Box 296, 7 Enterprise St., East Boothbay, ME 04544 Phone: 207-633-6517 www.washburndoughty.com Launch Site: East Boothbay, Maine 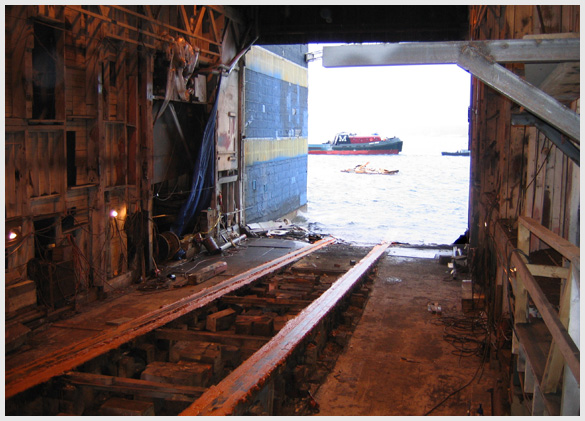 The building shed and railway at Washburn & Doughty. Launch of the Laura K. Moran.
Photo by John K. Hanson, Jr.

One of the world’s foremost towing and ship-handling companies found its boatbuilder in East Boothbay. It remains to be seen if the U.S. government has found such a perfect fit with Maine Marine Manufacturing and Hodgdon Yachts, but I’d say there’s a good chance.