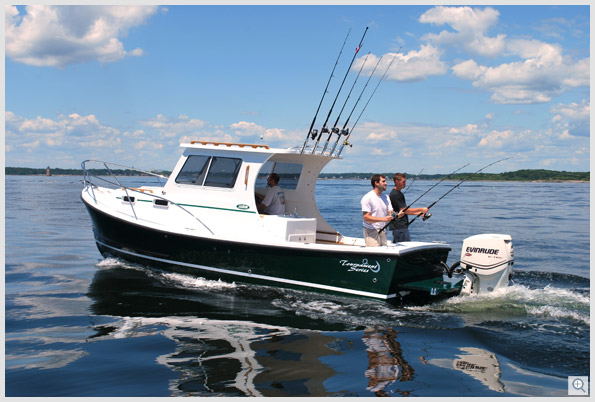 One versatile hull, three designs - Eastern 248 Center Console, Explorer, Tournament (shown)
Launch Details:
Particulars: It was, as they say, a “right stinky” day on Penobscot Bay: temps in the 40s and a confused chop whipped up by a stiff southeasterly that was about half air and half water. I was down on the shore walking the dog, thinking about how glad I was to not be bouncing around out there. Out in the distance, I saw a center-console boat coming into the Camden harbor entrance, a bone in its teeth, the orange Grundens-clad skipper standing nonchalantly behind the windshield. The boat was running flat, with little pounding or hobby horsing considering the short chop. As the boat idled into the inner harbor, two figures emerged from the bow dodger, stretched, and got ready to hop onto the public landing. No drama, just another day commuting from island to mainland. The boat was an Eastern 18, a model made famous by this no-nonsense capability to run smooth and dry pretty much no matter what the weather. I’ve always had a soft spot for these burly Easterns, whose workboat heritage is apparent whether they are being used for island commuting, hauling pots, or casting for stripers just outside the surf break. Eastern recently rolled out a big brother to the 18, the new 248. This 24-footer straddles the line between “big small boat” and “small big boat.” It’s designed to just squeak in under the maximum size for a trailerable craft, one that can be towed by a normal full-sized pickup or an SUV. The 248 comes in 3 flavors: Center Console, cuddy-cabin Explorer, or full-dress Tournament sportfishing version. All share a pleasing Downeast sheerline, integrated lifting strakes, ample freeboard aft, soft chines , and a partial keel that enhances low-speed handling.

Eastern 248 Center Console
The Center Console is the most basic of the 248 siblings. Its wide-open cockpit floor and ample freeboard bely its reasonable weight (the hull weighs circa 1,750 pounds) yet the dodger offers respite from spray, rain, and sun. Full sized V-berths forward have storage cubbies underneath. The self-bailing floor sits atop a full molded cockpit liner, which stiffens the hull, quiets the ride, and insulates the floor from the cold of the water beneath. The large console conceals a head in which it is actually possible to stand up, while the leaning post doubles as a live well. Suggested power is modest--90 to 150 horsepower.

The Eastern 248 Explorer
The 248 Explorer takes several steps from the bare-bones approach. It adds a hard-sided cabin with full standing headroom and sliding side windows. Large optional seat boxes line the cabin sides, offering lots of passenger room on top and storage underneath. The cabin holds a V-berth and a hanging locker, with reasonable headroom and enough teak trim (shelves and cabin sole) to dress up the accommodations without requiring a full-time yard crew to keep up with the brightwork. The Explorer’s added weight (about 1,300 pounds more than the CC) leads Eastern to recommend 150 to 225 horsepower. A single Armstrong outboard bracket is a popular option. The 248 Tournament is a no-holds-barred sportfishing tool. It starts with the basic Explorer cabin and adds a tackle station, L-shaped settee, cutting board and sink, and “rocket-launcher” rod holders on the cabin top. Eastern has made the Armstrong bracket standard on this version to maximize cockpit space. – Dave Getchell 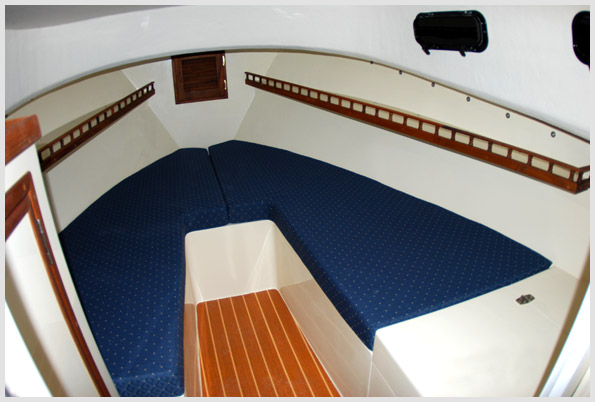 Eastern 248 V-Berth.
Image Gallery:
image gallery
Roll over numbers to view thumbnails. Click on the number to select an image.
Flash Player is required to view the slide show above.
If the slide show does not load, click here to download free Flash Player for your browser.


Information and specifications supplied by the builder. Every effort has been made to ensure accuracy. However, Maine Boats, Homes & Harbors, Inc. accepts no liability in the event of any errors of fact or omission.