Bolero hangs in the slings just before being re-launched at Rockport Marine.
Scroll down to view more images by Jamie Bloomquist.
Launch Details:
Particulars: Bolero, the famous Sparkman and Stephens-designed racing yawl, went back into the water on Saturday, May 15, 2010, after an 18-month-long restoration. A large and appreciative crowd gathered at Rockport Harbor to watch the boat emerge from the Rockport Marine shed where the work had been completed in time for the 2010 summer season. Bolero was originally launched in 1949 by the Henry B. Nevins Yacht Yard of City Island, New York, for the commodore of the New York Yacht Club. With a 51-foot waterline, the boat was as large as it could be and still qualify for the ocean races of the time. Bolero was the first to finish in several Bermuda races, and held the record for elapsed time in the race until 1974. 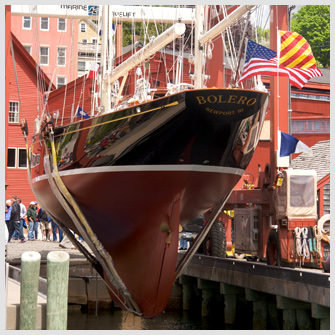 The 73-foot-long Bolero has long been considered one of Olin Stephens’s finest designs. In his book Lines Stephens wrote, “Bolero is an example of the best in practical yacht design using top-grade wood construction.” The current owners are dedicated to preserving the boat’s beauty and integrity. In a press release about the launching, one owner said, “This project has continued the tradition of superb craftsmanship that has been one of Bolero's hallmarks since she was conceived back in 1946. We are grateful that we can help preserve her legacy, and continue to enjoy her for years to come.” According to Rockport Marine, shipwright John England led a crew of up to 20 people in a complete restoration of the vessel over the course of the past year and a half. England said, “The efforts of an extremely talented crew made this restoration possible on a short time table.” The yard said that Bolero came in with many broken frames. Further inspection found that the horn timber and the deck beams were also ready for replacement and that the original cedar deck had been covered with plywood and a teak veneer, resulting in unnecessary thickness. England elected to completely re-frame the boat, replacing the original steam bent frames with new, laminated oak frames. This necessitated the removal of the interior and most of the hull planking. The new hull is double-planked African mahogany over cedar with epoxy glue between the layers. The new deck is composite with an Alaskan yellow cedar veneer; the original deck was full-thickness cedar. The interior was largely redone, and Bolero also had a complete systems overhaul, including the main and mizzen masts. The yard has been specializing in large restoration projects of late. They are currently restoring Adventuress, an 83’ Fife schooner, and Tradewind, a 1938 Alden motorsailer. Recently, the yard has been involved with a variety of projects from the cold-molded schooner Spirit of Bermuda, to the plank-on-frame historic replicas Adventure and Godspeed, the S & S six-meter Jill, the restoration of the P-class Bernice.
Contact: Rockport Marine 1 Main Street Rockport ME, 04856 207-236-9651 e-mail: office@rockportmarine.com website: www.rockportmarine.com
Information and specifications supplied by the builder. Every effort has been made to ensure accuracy. However, Maine Boats, Homes & Harbors, Inc. accepts no liability in the event of any errors of fact or omission.