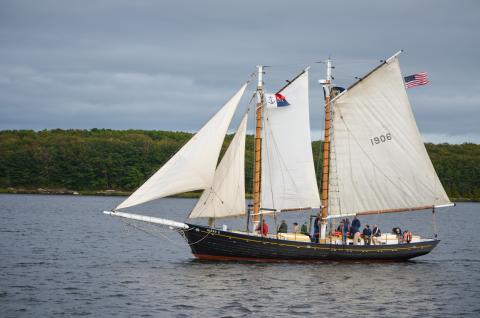 On September 30, 2019, the 1906 schooner Mary E, Maine Maritime Museum’s flagship and the oldest Maine-built fishing schooner still sailing, was entered in the National Register of Historic Places by the National Park Service, Department of the Interior.

Left at a dock to sink in the early 1960s, Mary E was raised, rebuilt, and maintained by a handful of people who recognized its significance in Maine’s history. The schooner now serves as an ambassador for the state’s maritime heritage – the last surviving schooner built on the Kennebec River.

Built in Bath, Maine, in 1906 as a fishing schooner, Mary E also served as a cargo carrier, windjammer, and is rumored to have been a rum-runner. After a long career as a fishing vessel off Block Island, Mary E was eventually abandoned in 1960, sinking in a hurricane in Lynn Harbor, Mass., in 1963. Two years later, William R. Donnell II of Bath purchased and raised the vessel, brought it to Bath, and began a two-year renovation on the grounds of what is now the Maine Maritime Museum campus. Following the renovation, Mary E served as a passenger vessel for many years.

In 2016, Maine Maritime Museum purchased Mary E from former owner Matt Culen, who had been running sailing trips aboard the vessel out of the Connecticut River Museum every summer. In spring of 2017, Mary Earrived at Maine Maritime Museum, where an extensive renovation took place in the museum’s historic shipyard. More than 500 individual and corporate donors contributed $1.5 million to fund the purchase, renovation, and ongoing maintenance of the Mary E.

Mary E was relaunched in the Kennebec River in spring 2018, and spent that summer and fall dockside, serving as a floating exhibit. This year (2019), Maine Maritime Museum began offering evening cruises aboard Mary E, giving the museum’s visitors the unique opportunity to sail aboard the historic vessel in the same waters where it was launched in 1906. In 2019, more than 8,200 visitors had the opportunity to board Mary E and learn about her incredible history.

“Mary E’s provenance and history make it the most perfect vessel for the museum to preserve, and the National Register listing confirms how significant Mary E is to Maine and to America’s maritime heritage. We’re grateful to the museum’s trustees and the many donors who recognized this and supported the restoration,” said Executive Director Amy Lent.

The Mary E is the third museum property named to the national register – the Percy & Small Shipyard (1971) and the Donnell House (1989) are also recognized. Authorized by the National Historic Preservation Act of 1966, the National Park Service's National Register of Historic Places is part of a national program to coordinate and support public and private efforts to identify, evaluate, and protect America's historic and archaeological resources.